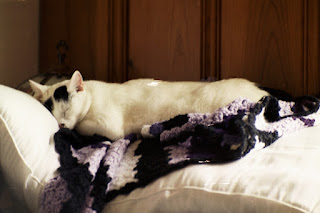 2017 has been a rough year for my house. Floppy had surgery last year to remove a cancerous lump from her breast; we found a second lump in her paw at the start of the year. She's had surgery; right now, she seems fine. She goes in for tests soon. She's not out of the clear.

Patches has been in kidney failure for a while. We've known and tried to do whatever we could to prolong the inevitable. We were discussing when was the time to stop fighting but she made the decision for us and passed away in her sleep early this morning. She was sixteen-years old.


I think Patches missed the house in this photo. This was where we lived when Patchy came to us. She was thrown from a car at our garage one night. We thought she was only a few weeks old, two maybe three months. She was tiny and her eyes crusted with infection. The vet thought she was young too, until he looked at her teeth. She was at least six months old, severely malnourished, fighting multiple infections, and recovering from burns on her ears.

She never fully recovered from whatever happened before she came to our home. Empty food bowls freaked her out. She jumped at loud sounds and hid when visitors came to the house. She hated to be picked up, caught unaware - we had to be very careful that she knew our intentions before we lifted her. She would get scared if we surprised her but, if we took the time to alert her, she was a sweet cat. She just needed to make all the decisions about when and where she was held and how she cuddled.

But she didn't like when we moved into our next house. I think she always missed her first house. She loved the windows, she loved the smells that came in - we had a row of spruce trees just behind the house and they smelled lovely.

The second house just wasn't the same. The yard sucked. She didn't mind not going out as much or having as much room to play - it was the smells and the coal trucks that drove by the house every day. They were loud and coal dust stinks. The next house was better, she had a decent yard, but she stopped laying in windows and starting sleeping outside on the porch in the kennel.


She got on pretty well with the other animals but favored the dogs. They keep watch, that's what dogs do, so I think she could relax with them around.

Patches liked to sleep against Dottie, I think she knew she was camouflage. But Patch hung out and played more with Dingo - Dots was just too energetic and loud for her.


She liked to crawl into the clothes hamper and lay on the dirty clothes. I will miss catching her do this.

2015 is when she began to slip downhill. She had a cancerous tumor removed that fall. And then her kidneys started to go. She went senile and lost control of her bladder but she didn't seem to mind diapers (she didn't like taking them off). She sometimes forgot her name but with that came a forgetting of the fear and that was a nice change - I wish the memory loss could've happened earlier, without all the other health concerns. She loved her daddy's facial hair, it was her favorite cheek rubbing place. That absence will be hard for hubs to adjust to and I really hope that Ms. Floppy is in a good place right now. I don't know if my house can handle much more loss right now.