I've talked about this before, when the city of Parkersburg, West Virginia made news at the Wild Hunt:


529.05 FORTUNETELLING, PALMISTRY, ASTROLOGY ETC. PROHIBITED. No person shall engage in or practice in any manner, within the corporate limits of the City, the trade or profession of palmisty, fortunetelling, astrology, phrenology, or any kindred trade or profession having as its object the foretelling of happenings of future events. (1947 Code §20.13)

This is my response.

Thank you,
a fucking heathen

Y'all feel free to reach out and tell them your thoughts as well: City Council of Parkersburg.

Popular rumor says that the city is even banning divination when no money changes hands... yes, the act of divination, never-you-mind the culture, is banned from any practice and that is supposedly from the mayor's own mouth (I suppose the Christians will be removing the Book of Revelations from their Bibles for Sunday morning services?). Another popular rumor says that this issue has already been deemed unconstitutional by the courts. I don't know what needs to happen to strike this unconstitutional crap from the record but it needs to happen and I think I (and every other local tax-payer) deserve an apology from the damn council. It's unAmerican, plain and simple, and I can't believe the council is wasting time and tax-payer dollars to violate the Constitution.

I don't live within the corporate limits of the city so the Council can't do shit about me pulling out one of my tarot decks and delivering a free reading for the unconstitutional City Council of Parkersburg, West Virginia.

Most of my cards are in storage due to the home repairs but I keep out The Goddess Tarot by Kris Waldherr for goddess-meditations.

First, I did a one-card draw. I know every good reader develops their own system of interpretation but, because of chronic illness, I lack the energy to provide y'all with one (and I don't use this deck for readings) so I'm providing the interpretation from the booklet that accompanies the deck. Take from it what you will. 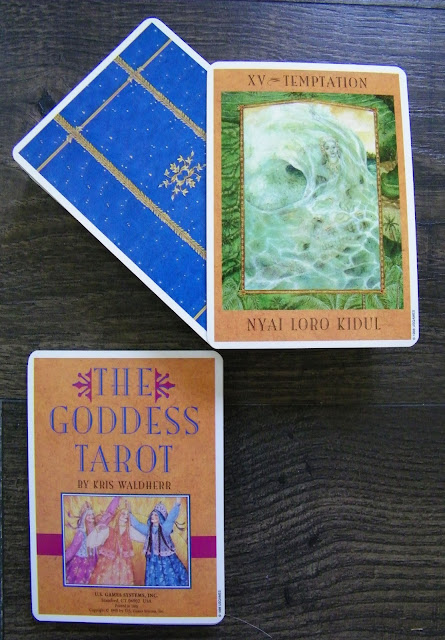 Within the green waves of the Pacific Ocean resides the seductive mermaid goddess Nyai Loro Kidul. Her powers reflect the temptation of illusion; of beauties which may be enslaving; of obsessions which control.

Meanings: Tempted by forces one cannot control. Something deep within the psyche -the shadow- personified as temptation or addiction. Sensual desires. Gluttony or envy.

Reversed: Freedom from temptations. Mastery over something previously controlling - a habit, a person, or a wound from the past.

Then, I did a three-card spread and every card was reversed.

Three cups have tipped over, spilling their magical water. But not all is lost - two cups are still full.

Meanings: Disappointment with intimate relationships, disillusionment, sadness. Concentrating on problems instead of assets. Desire to move on.

Reversed: A growing awareness that relationships are what you make of them.

Juno was honored as the patroness of marriage and other traditional rites of passages in women's lives. This Roman goddess was believed to watch and protect all women - from their first breath to their last.

Meanings: Following established social structures and traditions. In love relationships, the desire for marriage or declaration of intentions for the sake of security.

The woman juggles two pentacles. Completely focused upon her act, she does not drop the pentacles.

Meanings: The ability to juggle several situations at once. Jobs, opportunities. Grace and bounty. Commerce and expansion.

Reversed: Taking on too much. Time to concentrate on one thing at a time; master these before expanding.

I will not respond to messages/comments asking for private readings so please don't send them. I deal with chronic illness; I simply don't have the energy to do so. I'm sorry, I wish the situation was different.
Posted by Angie Lisle at 2:30 PM Labels: Angie Lisle, West Virginia

A person can't read cards at a park even if no money exchanges hands? It makes no sense. I take it the law makers don't even know what that is. How can they stop people from practicing a peaceful act? This law can be fought and brought to the higher levels of court. I'm sorry this has happened in your town. I'd do it anyway

According to the mayor, no fortune-telling or tools of divination, even in private at home. I have no idea how they will enforce it, especially since the Churches met today. We have a couple of working witches in the city and we think they are trying to shut out those businesses so it's clearly discrimination. I know several people have contacted the ACLU; they fought a similar case in Maryland a couple years ago so we're keeping our fingers crossed.