Another Sunday of Discrimination

I did two acts of bibliomancy last week that would've been a crime - if I was in the corporate city limits of Parkersburg, WV.

I would like to point out that, according to Parkersburg's city council, all of the churches within corporate city limits broke the law (again) yesterday by using a tool of divination during their services. Bibliomancy is firmly rooted in the Bible.

Nary a one of those churches received an official visit from law enforcement.

Is this the same response Pagans will get? Or maybe the law is lax on Sundays for everyone equally? Or will the council admit that this is just flat-out discrimination against non-Christian practices?

Y'all feel free to reach out and tell your thoughts to the City Council of Parkersburg.

I meant to do another act of bibliomancy yesterday -I feel that it is only right for Sundays to be dedicated to bibliomancy because of the use of the Bible in regards to that particular form of divination- but humidity kicked my ass with a migraine (yesterday, it was only 92°F but, with the humidity, it felt like 101°F. Today, it's 94°F with 55% humidity that feels like 108°F. I have a feeling I'm gonna be knocked on my ass again this evening).

And because migraines are migraines, I haven't finished reading any of the books I'm to review. So y'all are getting tarot readings this week.

I use The Goddess Tarot by Kris Waldherr for goddess-studies and goddess-meditations but this isn't a deck that speaks to me on a divination-level. I will be introducing new decks to the blog soon. I don't know when, but soon. I still have to dig them out of storage.

This reading is for the unconstitutional City Council of Parkersburg, WV.

First, I drew one-card; this is today's message, a sum of what the other cards examine. 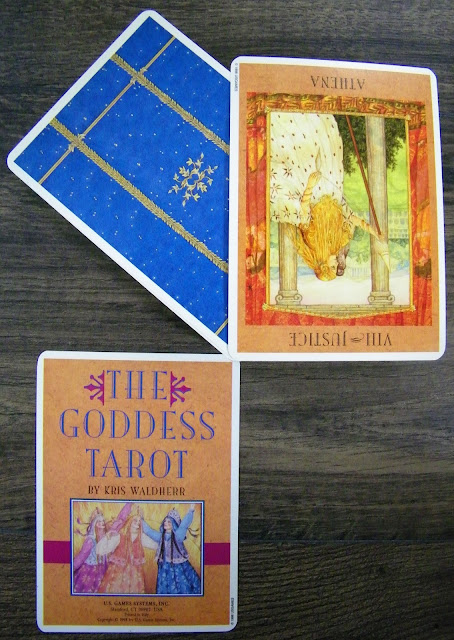 Often depicted with an owl as a symbol of enlightenment, the Greek goddess Athena's brilliance of reason was said to be as penetrating as her clear, gray eyes. Skilled without equal in the art of battle, she gave just protecction to those in need of defense.

Meanings: The need to take a more detached viewpoint of a troublesome situation. Imagine yourself as wise as Athena: are you being fair to yourself and those around you? The ability to defend oneself so that justice may be done.

Reversed: Frustration with bureaucracies or organizations. Impatience with red tape.

The Past, or foundation of the matter being considered.
XIII. Transformation: Ukemochi

After her death, the Japanese food goddess Ukemochi's body transformed to supply food to humanity. Her head turned into cows; grain sprouted from her forehead; rice plants sprouted from the goddess's belly - and so, life was transformed from death.

Meanings: Transformations. The need to allow something to die in order to create room for the new. Painful change that is necessary. Creating life out of death.

The Present, or the way things stand now.
Seven of Swords

The woman is trying to carry seven swords, but only five will fit in her arms. As she looks over her shoulder she hopes the swords left behind will not be used against her.

Meanings: The ability to defend oneself in a difficult situation. However, energy should not be placed in recriminations. Need for caution and examination.


The Future, or possibilities that may arise if the present path continues as is.
Ten of Staves
(reversed)

Ten staves, rich with green leaves and life, radiate from the sun. They are extensions of the sun's life-giving force.

Meanings: The cumulation of the creative venture begun with one of the staves. Success that becomes overwhelming with its responsibilities.

Reversed: Overwhelmed and burdened by responsibilities.

I will not respond to messages/comments asking for private readings so please don't send them. I deal with chronic illness; I simply don't have the energy to do so. I'm sorry, I wish the situation was different.