Peel Back the Skin

Peel Back the Skin, edited by Anthony Rivera and Sharon Lawson, is a new anthology from Grey Matter Press.

Available on June 7, 2016 at Amazon, Barnes and Noble, and BooksAMillion. 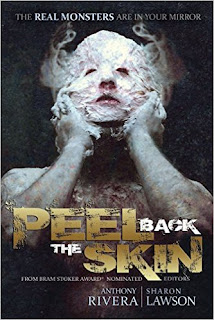 They're among us. They live down the street, in the apartment next door and even in our own homes. They're the real monsters. And they stare back at us from our bathroom mirrors. PEEL BACK THE SKIN is a powerhouse anthology of terror that strips away the human mask from the real monsters of our time -- mankind.

Peel Back the Skin: Anthology of Horror Stories by Jonathan Maberry
My rating: 5 of 5 stars

A well-written and edited collection of horror stories that can be read at any time of the year, not just at Halloween. There's a little bit of everything for everyone here. Some of the stories are psychological, some have supernatural kinks thrown in, some are reminiscent of slasher-flicks. All of these stories deal with human response to the darkness.

Many of the stories also include references to other authors, creating a to-read list for anyone who's interested in making note of them.

I'm a life-long lover of both the horror genre and short story collections which is probably why I received a free advanced reader's copy of this book in exchange for a review. I enjoyed all of the stories in this anthology. The only problem I experienced was that some of the physical responses to pain momentarily kicked me out of certain stories and I had to remind myself of research suggesting that psychopaths don't register pain like normal people before I could go on. Keep that in mind while you read (that statement might spoil a couple of the stories...if so, I apologize).

The majority of stories depict human monsters. Tim Lebbon's 'The Protector' and Joe McKinney's 'The Shed' examines what happens when the monsters are close enough to be called family, while Yvonne Navarro's 'Superheated' and Ray Garton's 'Burning Leaves on an Autumn Day' explores the monsters who live nearby, on the periphery of the main characters' lives. 'Family Bible' by Ed Kurtz illustrates how mental problems may be taught and reinforced within the family while Graham Masterton's 'The Greatest Gift' shows us how two folks with psychological issues can feed each other's demons. The past comes hunting a group of former children in John McCallum Swain's 'Beholder' and Nancy Collin's 'Gator Lake' metes out justice to a monster far more dangerous than the title creature.

But a few stories do contain magical content. In Durand Sheng Welsh’s ‘Life, or Whatever Passes for It’, several legends come together to create a gruesome tale about the Fountain of Youth and 'Orphans of Air' by James Lowder imagines what could happen if corporate monsters had preternatural powers. Erik Williams' 'The Long Bright Descent' depicts a modern-take on an age-old battle between light and darkness.

Two stories stood out to me. I continued to work out William Meikle's ghostly tale, 'The Lady of the Minch', long after I'd finished the story. I was on my exercise bike and set this book aside as I pedaled and stared into space while this story played out for a second time, all the dots now connected. And Charles Austin Muir's surprise at the end of 'Party Monster' caught me off-guard. Juggling the multiple parts of the story, I wasn't expecting the final page when I reached it and hadn't worked my way toward the reasons why all of this went down.

I also enjoyed the psychological twists to some of these tales. Jonathan Maberry's 'Mystic' seems straight-up, until you ask yourself if the main character is really seeing dead people or is he suffering from mental delusions? The real monster of the story depends on how you answer that question. Is the Navajo skinwalker in Lucy Synder's 'Moth Frenzy' a real supernatural predator or is this a drug-and-trauma-induced psychological disorder responsible for creating the myth? You be the judge.