You can buy a copy of The Dark Frigate by Charles Boardman Hawes at Amazon, Barnes and Noble, and BooksAMillion or you can read a copy for free through Project Gutenberg. 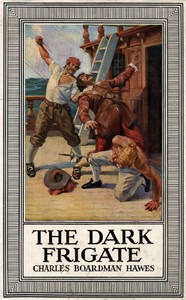 In seventeenth century England, a terrible accident forces orphaned Philip Marsham to flee London in fear for his life. Bred to the sea, he signs on with the "Rose of Devon," a dark frigate bound for the quiet shores of Newfoundland.

Philip's bold spirit and knowledge of the sea soon win him his captain's regard. But when the "Rose of Devon" is seized in midocean by a devious group of men plucked from a floating wreck, Philip is forced to accompany these "gentlemen of fortune" on their murderous expeditions. Like it or not, Philip Marsham is now a pirate--with only the hangman awaiting his return to England.
With its bloody battles, brutal buccaneers, and bold, spirited hero, this rousing tale will enthrall young listeners in search of seafaring adventure.

The Dark Frigate by Charles Boardman Hawes
My rating: 1 of 5 stars

I enjoyed Defoe's Moll Flanders - a book driven by carnal sins and being a woman in a world with few options and even less legal rights. Moll is a book I wouldn't share with children - older teens, yes, especially young women, but not children - so this book feels like a way of encouraging children to dismiss women, to dismiss Moll Flanders, before the child is even old enough to read Moll Flanders.

Hawes removes the carnal sins that drive Moll Flanders so his story falls flat. The few action scenes that liven up the story are few and far between. Philip Marsham mostly stands around, speaking archaic language with some random fellas he hooks up with, choosing to do NOTHING to stop events he knows about before they happen (some call that acting as an accomplice). And it's all of his own volition. He has other choices, he just doesn't make them. Then, after escaping the consequences of his bad decisions, Philip gets a hunky-dory happy ending, stepping up to take the place of his privileged grandfather - so unlike poor Moll, which makes me want to slap Hawes because he missed the entire point of Moll Flanders (a legal system slanted for the privileged wealthy, for men instead of women).

Just skip this book and go read Moll Flanders; it's a better book with more substance than Hawes' poor imitation.