Waterless Mountain by Laura Adams Armer and Sidney Armer is available at Amazon, Barnes and Noble, and BooksAMillion.

This book is the 1932 Newbery Medal Winner. 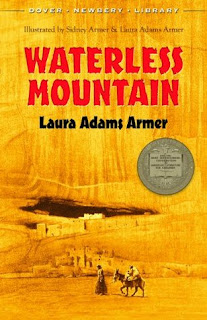 Younger Brother lives in a dry land, and he dreams of finding the wide water of the Pacific Ocean. This gentle coming-of-age story, rooted in the traditional culture of the Navajo, recounts Younger Brother's journey toward finding his vocation as a medicine man. Under the guidance of his uncle, the boy learns about the ancient songs, customs, and ceremonies of his people as well as the modern-day magic of movies and airplanes.

Written in the 1930s by an authority on Native American life and lore, this Newbery Medal winner offers a vivid portrait of Navajo beliefs and traditions. Its simple but poetic storytelling style is enhanced by numerous black-and-white illustrations

Waterless Mountain by Laura Adams Armer
My rating: 1 of 5 stars

I read this book as part of my goal to read all the Newbery Medal and Honor books, a goal I started as a child, when the adults around me filtered my books. I'm not surprised that they didn't hand me this book to read. This book depicts the Navajo culture but subtle racism laces through the text. Example: "Being an Indian he found entertainment in just lying still and doing nothing."

Multiple studies suggest that negative stereotyping has negative impact on native children and may be an underlying cause of both the high dropout rate of school-children and the high suicide rate among Native American youth. I wouldn't feel comfortable sharing this book with a Navajo child, not unless I wanted to encourage the child to write a better book about their people and needed to show examples of what's wrong with the literature already out there.

And worse - the quoted line above sums up the action and plot of this book. There's not much going on in those departments. The biggest selling point is the exposure to Navajo/Dine ceremonies and one could lift the Navajo/western references, substituting from any sheep-herding culture, like Ireland or Israel, and the nature of this book wouldn't change much.

Some would argue that this book is an example of culture appropriation. I'm not going to. You can plan a vacation and visit the Navajo Nation to watch public ceremonies and experience the culture for yourself. You'd walk away with just as much insight as Younger Brother - possibly even more, depending on how involved you became with the locals.

I find the theme, a waterless mountain containing a hidden pool of water at its heart, ironic because the book is shallow. At no time did I ever feel like I was seeing inside Navajo culture. It's as though Younger Brother is outside, watching in. Like Laura Adams Armer and Sidney Armer. We see the surface of a mask but not the person wearing the mask. And no matter how much I looked for a deeper meaning, I couldn't find it. The mysticism comes off as new-agey and, with Younger Brother lying around and imagining things like dancing with star children, I question his authority on what's authentic Navajo culture versus fanciful imagination.

Younger Brother barely reacts to a white boy stealing a sacred relic. This would have been a good opportunity to work in a real plot, considering that this is an on-going problem for Native Americans, but Younger Brother's emotional response is flippant. When I tried to look for a deeper meaning, I came away with the message that it's okay to let other people take your sacred items and not fight back for them, to turn your back and walk away. His response feels like an attempt to justify such theft, to foist anthropological notions on native youths (let us study your relics). Some people argue that this book preserves early Navajo-rez life and that Younger Brother reacted in the only way he was allowed to react. In that context, this book certainly inspires discussion but that discussion is geared for older students, not children. This book barely touches upon the hardships of either early or modern rez-life and to even discuss the role of this book for such purposes requires an acquaintance with the history of rez-life, something that most children in this country do not have as this history is not taught in the majority of U.S. schools.

I'd never discourage someone who shares the goal of reading all the Newbery books from completing such a task but, if you're wanting to research Navajo culture, I'd suggest looking elsewhere (plan that vacation).