You buy a copy of The Great Quest by Charles Boardman Hawes at Barnes and Noble or you can read the story for free through Amazon and Project Gutenberg. 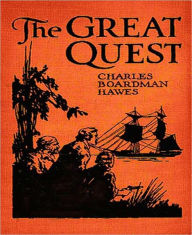 A romance of 1826, wherein are recorded the experiences of Josiah Woods of Topham, and of those others with whom he sailed for Cuba and the Gulf of Guinea.

The Great Quest by Charles Boardman Hawes
My rating: 3 of 5 stars

I've read all of the Medal and Honor books for the 1922 Newbery Award and this is the book that I think should have won that year because of its use as a teaching tool (I wasn't overly impressed with any of the books for 1922). Of course, that means this book will appeal more to parents and teachers than the children, ha.

On the surface, this book appears to be a pirate adventure story for children but, plunge deeper, and the horrors of the African slave-trade make themselves known. This book was written at a time when pirate tales were popular among young boys. Those romanticized stories revolve around stolen gold without going into too much detail about where that gold came from or how it was claimed. This book takes those pirate tales one step further, showing children how those treasure hordes were often linked to the trade in human flesh.

Is this book PC? Absolutely not, but the language preserves a time when these attitudes were socially-acceptable while also illustrating the human slave trade. This book can be used as a stepping stone for teaching children about the history of racism. I recommend using this book in conjunction with nonfiction historical accounts of the slavery-bans on both sides of the Atlantic Ocean to help show kids how the world used to be and to help them understand why some people have given so much to change it (from the British Slavery Abolition Act of 1833 to the American Civil War to Dr. Martin Luther King, Jr and on into the present day).

I wish the story had more action, particularly for the main character Joe Woods. He stands around, watching, for most of the book. Hawes also lapsed into telling instead of showing, which can frustrate any reader at any age. The ship's journeys -from New England to Cuba to Africa and back to South America and New England- are glossed over. Those depictions could have been interesting and helped with the romanticism of the age. The language is sometimes archaic; the dictionary capabilities of eReaders can help with the vocabulary. And the book is free; free copies can be found at both Amazon and Project Gutenberg.