Son of a Wanted Man

Son of a Wanted Man by Louis L'Amour is available at Amazon, Barnes and Noble, and BooksAMillion.

Both Tyrel Sackett and Borden Chantry are pivotal to this story.

My reviews of the books both in and related to the The Sacketts series can be found here:

My reviews of the Talon and Chantry books can be found here: 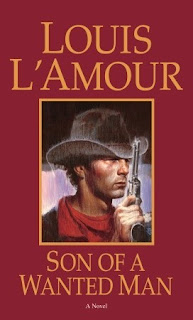 In a remote corner of Utah lies the secret outlaw kingdom of Ben Curry. For fifteen years Curry has ruled supreme, as his men have pulled jobs from Canada to Mexico. But the king is getting old... he wants to turn his legacy over to someone younger, tougher. Mike Bastian is Ben's adopted son, a young man who can handle a knife, a gun, his fists, but a man who's never broken the law.

Now, as treachery explodes among Ben's riders, and two honest lawmen—Tyrel Sackett and Borden Chantry—begin to zero in on the gang, Mike must choose...between his loyalty to Ben and his yearning for a different life. Yet when the guns start echoing off the Vermilion Cliffs, the time for choosing is over—and the time for battle has begun.

Son of a Wanted Man by Louis L'Amour
My rating: 3 of 5 stars

I've said this before about other L'Amour books and I'll say it again: This book, like a few other of L'Amour's books, reminds me of a screenplay and I've wondered if the initial draft emerged as a script and changed gears at a later time in the editing process.

The beginning is especially rough. L'Amour sets up the background at least three times in the first few chapters but the storytelling gets better as the story progresses away from background material. L'Amour occasionally struggled with multiple POV changes but not with this book - the way he handled the arrivals of sister Juliana and Drusilla Ragan, Tyrel Sackett, Borden Chantry and his deputy, Kim Baca is part of why this story feels so much like a Hollywood script. Then, there's a cozy romantic ending, the sort I like on warm rainy afternoons.

The one thing I love most about L'Amour's writing is missing from this book - his descriptions of nature and a movie, where I can actually see the background, would fill that gap but, alas, no movies have been made about this book.

Posted by Angie Lisle at 11:30 AM Labels: Reviews