The Man from the Broken Hills

The Man from the Broken Hills by Louis L'Amour is available at Amazon, Barnes and Noble, and BooksAMillion. 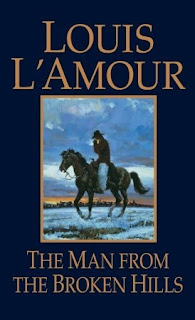 For years Milo Talon had been riding the outlaw trail, looking for a man who had betrayed his family. Only Hank Rossiter wasn’t the man he had been: old now and blind, Rossiter was trying desperately to hold on to a small ranch to support his daughter, Barbara.

Suddenly Talon found himself in the middle of a range war, siding with the man he’d marked for payback. But had Rossiter really changed? And could his daughter be trusted by either of them? For Milo, getting to the truth meant a long hard fight to separate his enemies from his friends—and forgiveness from revenge.


The Man from the Broken Hills by Louis L'Amour
My rating: 3 of 5 stars

Milo is all over the place - he asks questions but doesn't go looking for the answers, he waits for the answers to come to him. Then, when one answer does arrive, he asks all the old questions again and we start the process over. This means that the clues arrive in a rather haphazard fashion. Add to that, L'Amour uses sleight of hand to make sure the readers never know everything they need to know about the area Milo is working (known as The Basin), which makes it difficult to figure out who and where the criminals are. And, unlike other books in this series, I have no memories of my grandfather reading this book to me when I was little so I didn't figure out who the killer was until L'Amour decided to tell me - that's a good thing, the book kept me guessing, but I wish Milo was a little more organized in his pursuit.