The Ferguson Rifle by Louis L'Amour is available at Amazon, Barnes and Noble, and BooksAMillion. 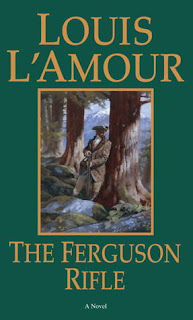 It began with gold that had once belonged to Montezuma. Stolen and cached in a church in Mexico, it was recovered by two army officers who fled north for the French settlements. Along the way one stabbed the other to death. The remaining officer was eventually killed by Plains Indians, but he buried the treasure just before he died.


Now Ronan Chantry, a handful of trappers, and an Irish girl whose father was killed after telling her a few vague landmarks are searching for the lost treasure. But they are not alone. The girl’s uncle, Rafen Falvey, wants it, too. Like Chantry, he is well educated, bold, and determined. Under different circumstances the two men might have been friends. But in all likelihood it wouldn’t have made any difference. When it comes to gold, even friendship doesn’t keep men from killing each other.


The Ferguson Rifle by Louis L'Amour
My rating: 2 of 5 stars

The story didn't feel as put together as other L'Amour stories - there were a few rough patches where the narrative broke/didn't flow seamlessly. And the repetition, sheesh. Ronan Chantry gained the nickname Scholar as he moved west and, every time he was introduced to another character by that nickname, we readers got the story about why he's called Scholar. How many times did I need to hear that story?

The same applied to all of the information given in regard to the plot's mysteries - the same information was repeated multiple times without further development of the information. It felt like L'Amour, when writing the rough draft, couldn't remember if he'd already told us the information so he mentioned it every time he thought we needed it and then forgot to go back and weed out excessive/repetitive passages. This one was a rough read for me, the repetition aggravated me more than normal.