Rivers West by Louis L'Amour is available at Amazon, Barnes and Noble, and BooksAMillion. 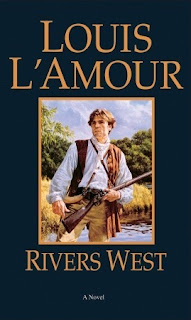 His dream was to build magnificent steamboats to ply the rivers of the American frontier.

But when Jean Talon began his journey westward, he stumbled upon a deadly conspiracy involving a young woman’s search to find her missing brother, and a ruthless band of renegades. Led by the brazen Baron Torville, this makeshift army of opportunists is plotting a violent takeover of the Louisiana Territory.

Jean swears to find a way to stop this daring plan. If he doesn’t, it will not only put an end to all his dreams; it will change the course of history—and destroy the promise of the American frontier.

Rivers West by Louis L'Amour
My rating: 2 of 5 stars

The memories are what I love most about this book. I remember my grandpa - a fan of boxing and wrestling - reading this book to us grand kids while my male cousins acted out the action scenes. They loved it. I did not. I disliked the main female character, Ms. Marjoriebanks, for being a snot-nosed brat (I refused to act her part). I was apathetic to the main male character, Jean Daniel Talon, because he doesn't feel complete (and that's probably why I don't like Marjoribanks either, L'Amour didn't bother to build her up to who she should have been). My feelings haven't changed much as an adult.

This book isn't finished. It feels like I'm reading a rough draft instead of a finalized novel. Maybe that's why my cousins enjoyed it so much, it's incompleteness allowed them to insinuate themselves as they acted out fight scenes, but it's hard for someone like me to read. I think about how much better this book could be, if it wasn't so bare.

As a child, my grandpa told me I was clever when I pointed out that the text is repetitive. I appreciate that memory. But I still feel like L'Amour skimped out. He used a lot of key words without giving a real description. He tells without showing.

The bones for a good story are here. L'Amour, acting out of character, missed multiple opportunities to work in real history; instead, he focused on this imaginary scheme he fictioned up and this scheme feels bare because it has no history to back it up. Like the main characters, the villains aren't complete either. We hear about them more than we see them. L'Amour doesn't build suspense for the big whammy he tells us about at the rushed ending.

I don't even know who to blame for it - L'Amour for pushing this through to publication or the publisher for letting it go to publication as is. If the estate of L'Amour ever gets around to publishing more of his work, the first thing they should do is hire a ghostwriter to finish fleshing out this book. I want to read that book in memoriam to my grandfather.