North to the Rails (Talon and Chantry, #6)

North to the Rails by Louis L'Amour is available at Amazon, Barnes and Noble, and BooksAMillion. 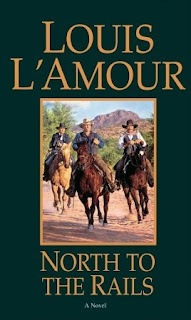 When Tom Chantry comes west to buy cattle, he quickly runs into trouble. During a drunken scuffle in a bar, Dutch Akin challenges Chantry to a gunfight. Leaving town rather than face Akin, Chantry is quickly branded a coward.

Later, when hiring men to take his herd to the railroad, Chantry faces a dilemma: No one wants to make the long, dangerous ride with a leader of questionable courage. So when French Williams, a shrewd and ruthless cattleman, makes Chantry an offer, Tom reluctantly accepts his unusual terms: Tom must remain with the drive from start to finish. If he fails to do so, the entire herd will belong to French.

Tom quickly learns that life is not going to be made easy for him. The first man French hires is Dutch Akin.

North to the Rails by Louis L'Amour
My rating: 3 of 5 stars

Tom Chantry, the son of Borden Chantry, starts out with the reputation of a coward with a distaste for guns - a character vastly different from the sort usually presented by L'Amour. L'Amour took a strong stance on guns in this book, with the wild west eroding Tom's idealism in an effort to show why guns are sometimes necessary. This story will appeal to advocates for the Second Amendment, serving as a clear example of how criminals don't bother to pay attention to laws.

The story felt splotchy, as though the seams showed in between the scenes. I know L'Amour didn't enjoy editing but this book, like many of L'Amour's books, contains typos and printing errors that I blame on the publishers. It's a missing (conjunctive) word or the wrong tense of a word in a passage not attempting a vernacular dialect; small things that should've been weeded out long ago because these books have been through multiple printings. The errors don't inhibit understanding of the passage but they are a minor annoyance that momentarily distracts me from the story.

My favorite part of this book is the ending because it exemplifies hubris. I'm not giving away more spoiler than that; I just want to note that the ending of this book has been my favorite from any of the books in either the Sacketts or Talon and Chantry series.