Milo Talon by Louis L'Amour is available at Amazon, Barnes and Noble, and BooksAMillion.

This may account for why I have no memories of my grandfather reading me the book - he had ideas about how men weren't supposed to discuss sex with young females and considered it his job to protect me from such things until I was old enough to know of them. He used to clap his hands over my ears when we watched westerns, like The Best Little Whorehouse in Texas, so I wouldn't hear words like brothel or whorehouse.

And, for what its worth, I spent the first six years of my life thinking whorehouse was actually horsehouse, just another way of saying stable, so learning that men visited those locations for sex definitely put ideas in my head that grandpa wouldn't have liked. I never told him about that though. :) 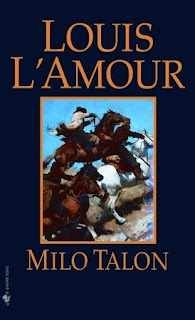 Milo Talon knew the territory and the good men from the bad. He had ridden the Outlaw Trail and could find out things others couldn’t. That was why a rich man named Jefferson Henry hired Milo to hunt down a missing girl. But from the moment Milo began his search, he knew something wasn’t right. Three people had already died, an innocent woman was on the run, and a once sleepy town was getting crowded with hired guns. Suddenly, Milo Talon realized that there were still things he had to learn—about the woman he was trying to find, the man who had hired him, and the murderer who wanted him dead. But most of all, Milo had a few things to learn about himself. And he would have to work fast, because one mistake could cost him his life.…

Milo Talon by Louis L'Amour
My rating: 3 of 5 stars

This book has the element I love most from L'Amour - great descriptions! I can imagine everything that L'Amour wants me to see; that's his strong point. This book, like many of L'Amour's books, has typos and printing errors and I lay the blame on the publishers because these books have been out long enough that those errors should be caught and corrected before the next printing.

I figured out the plot almost as soon as the characters were introduced but I'm not sure if that happened because I heard the story in the hazy days of childhood or if it's because the whodunit is just that obvious. I knew what was going on from page one and I'm inclined to think it was from the prior reading.

Milo Talon drives me crazy with the way he solves crimes. Milo has all the info he needs right at his fingertips but doesn't use those tools to figure out what's up. We keep going around and around in his head because he won't stop and take the time to look for the answers to his questions. And because real life detective work doesn't work that way, this book has the feel of a cozy mystery rather than detective noir. That's not necessarily a bad thing - I love cozies which is probably why I like the Talon and Chantry series but, if you're wanting a good detective story, look elsewhere.

L'Amour gets tagged as an author who doesn't depict other races well. He does use the typical (negative) stereotypes in some of his stories but he also surprises me by occasionally throwing in characters who break the stereotypes/tropes that were commonly depicted at the time of drafting/writing. I sometimes think this was his way of fighting the system, to work in those characters when he could get away with it. In this book, Milo depends on a bunch of Latinos for back-up. Some would argue that it's an evolution of the Tonto/side-kick trope, and maybe it is, but I do enjoy his depictions of Mexican-Americans because it isn't the layabout/border-jumping/drug cartel stereotypes that we see depicted so frequently in pop-art today. L'Amour gave us competent Latino cowboys who are good at their jobs - they wouldn't be alive and working if they weren't good at cowboying up (which is accurate to history - a good percentage of cowboys weren't the white boy we see depicted in Hollywood westerns). It was a nice change of pace that gave me an excuse to imagine Emilio Rivera (as Pablo) and Danny Trejo (as Felipe) into the story (and I'm not going to complain about fantasizing about those two).

This man has one of the sexiest voices I've ever heard. He could probably talk my clitoris into an orgasm without ever touching her.

And this guy is just an all-around badass who now owns Trejo's Tacos, which is on my list of places to eat, if/when I'm ever out that way.
I have no idea who owns these photos; I borrowed them from a google search but I thought the post needed a little *something* today. If you are the owner and want credit, drop me a line.
Posted by Angie Lisle at 2:42 PM Labels: Reviews