Fair Blows the Wind by Louis L'Amour is available at Amazon, Barnes and Noble, and BooksAMillion. 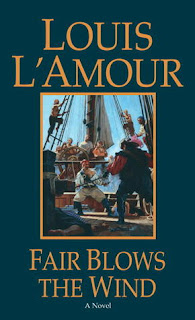 After his father was killed by the British and his home burned, young Tatton Chantry left Ireland to make his fortune and regain the land that was rightfully his.

Schooled along the way in the use of arms, Chantry arrives in London a wiser and far more dangerous man. He invests in trading ventures, but on a voyage to the New World his party is attacked by Indians and he is marooned in the untamed wilderness of the Carolina coast.

It is in this darkest time, when everything seems lost, that Chantry encounters a remarkable opportunity. . . . Suddenly all his dreams are within reach: extraordinary wealth, his family land, and the heart of a Peruvian beauty. But first he must survive Indians, pirates, and a rogue swordsman who has vowed to see him dead.

Fair Blows the Wind by Louis L'Amour
My rating: 3 of 5 stars

I'm reading the Chantry and Talon novels in the order suggested on L'Amour's website. Borden Chantry was set in the 19th century American West. Fair Blows the Wind jumps back in time to 16th-century Europe with a 28-year old runaway, an Irish Royal working under the assumed name of Tatton Chantry, who's abandoned on the wild American coast.

The writing style is similar to the first two books in The Sacketts series, Sackett's Land and To The Far Blue Mountains, with one exception: a good portion of this book is spent inside Chantry's head during a flashback as he recalls his life, his coming of age, and the events that conspired to bring him to the American coast. Then, about three-quarters into the book, L'Amour brings us back to the present moment and the wealth, land, and Peruvian beauty beckoning Chantry forward.

I enjoy the history that L'Amour works into his stories and this book is no exception, but it is a tough book to read following Borden Chantry because of the change in writing style. I would recommend reading this book after To The Far Blue Mountains, before continuing on with The Sacketts and Talon/Chantry series.

Posted by Angie Lisle at 11:00 AM Labels: Reviews