Ride the Dark Trail (The Sacketts #18)

Ride the Dark Trail is the eighteenth book in The Sacketts series by Louis L'Amour. Available at Amazon, Barnes and Noble, and BooksAMillion. 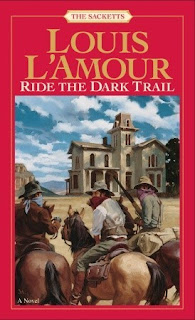 In Ride the Dark Trail, Louis L'Amour tells the story of Logan Sackett, a cynical drifter who changes his ways to help a widow keep her land.

Logan Sackett is wild and rootless, riding west in search of easy living. Then he meets Emily Talon, a fiery old widow who is even wilder than he is. Tall and lean, Em is determined to defend herself against the jealous locals who are trying to take her home. Logan doesn't want to get involved—until he finds out that Em was born a Sackett. Em is bucking overwhelming odds, but Logan won't let her stand alone. For even the rebellious drifter knows that part of being a Sackett is backing up your family when they need you.

Ride the Dark Trail by Louis L'Amour
My rating: 4 of 5 stars

I loved this book, in the same way that I loved Ride the River. Emily Talon née Sackett is one fierce old widowed lady, probably a darlin' Corey in the days of her youth (...she had a 44 strapped around her body and a banjo on her knee...).

After Em's husband dies, a bunch of lazy cowhands think they will just come in and take what Em has because her menfolk are gone. Until a long-lost cousin - Logan Sackett, twin brother of Nolan Sackett and possibly the most trigger-happy Sackett of them all - drifts in to teach the villains otherwise.

This is one of the more action-packed books of the series, with the action done in L'Amour's typical style. My chief complaint is that Em appears frequently at the beginning of the book, but then the attention shifts to Logan as Em quietly steps into the background where another potentially strong female character hides in Pennywell Farman. That promise isn't developed in this book but, while the end of the Sackett series draws nigh, I know there's a spin-off series, the Talon and Chantry novels, and I'm hoping to see more of Pennywell (maybe Em too) in one of those books.