Lonely on the Mountain (The Sacketts #19)

Lonely on the Mountain, the nineteenth and final book in The Sacketts series by Louis L'Amour, is available at Amazon, Barnes and Noble, and BooksAMillion.

There is a spin-off series, the Talon and Chantry Novels, the Talon family matriarch being none other than Emily Talon née Sackett from Ride the Dark Trail. There's also a couple stand-alone books that involve Sackett men and they are on my to-read list but I'm taking a small break from L'Amour, no more than a week or two, to read other authors. 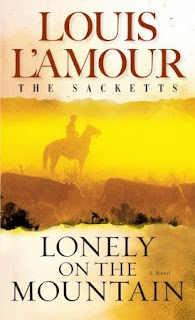 In Lonely on the Mountain, Louis L’Amour’s solitary wandering Sackett brothers make a stand together—to save one of their own.

The rare letters Tell Sackett received always had trouble inside. And the terse note from his cousin Logan is no exception. Logan faces starvation or a hanging if Tell can’t drive a herd of cattle from Kansas to British Columbia before winter.

To get to Logan, Tell must brave prairie fires, buffalo stampedes, and Sioux war parties. But worse trouble waits, for a mysterious enemy shadows Sackett’s every move across the Dakotas and the Canadian Rockies. Tell Sackett has never abandoned another Sackett in need. He will bring aid to Logan—or die trying.

Lonely on the Mountain by Louis L'Amour
My rating: 3 of 5 stars

Several of the Sackett gang appears in this story - William Tell, and both his brothers, Orrin and Tyrell, ride out to rescue cousin Logan locked up in a British Columbian jail.

The POV changes between characters a few times, but we readers mostly ride with William Tell. The POV changes should've helped break the monotony except all the characters are doing the same thing - riding a lonely trail through the grasslands spreading out at the foot of the Rocky Mountains, each character looking for the others because of stuff that keeps separating them (no spoilers).

Despite all that, three-quarters of the book kept me involved. The book was headed for four-stars but L'Amour rushed right through the ending, failing to deliver the promised showdown.

This book might fall into the final position of The Sackett's chronological order, but it wasn't last book published. Lonely on the Mountain was published in 1980, as was The Warrior's Path, with Ride the River published in 1983 and Jubal Sackett in 1985. I think L'Amour expected to return to Logan and Tell, as the ending of this book sets up the start of another town, but L'Amour may have passed away before he could do so. I know the L'Amour family promised to continue publishing his unpublished manuscripts but those haven't appeared on the market (where's a ghost-writer when ya need one?).

[GRRM could take a lesson here - ol' man, hurry up and finish your series before you die so you don't leave readers hanging like L'Amour did.]

But there's the Talon and Chantry novels to look forward to; I'm hoping the spin-off series (finished by 1981) will minimize the gap that's left by the abrupt ending of this series.