Treasure Mountain is the seventeenth book in The Sacketts series by Louis L'Amour. Available at Amazon, Barnes and Noble, and BooksAMillion. 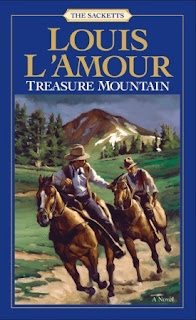 In Treasure Mountain, Louis L’Amour delivers a robust story of two brothers searching to learn the fate of their missing father—and finding themselves in a struggle just to stay alive.

Orrin and Tell Sackett had come to exotic New Orleans looking for answers to their father’s disappearance twenty years before. To uncover the truth, the brothers enlisted the aid of a trail wise Gypsy and a mysterious voodoo priest as they sought to re-create their father’s last trek.

But Louisiana is a dangerous land, and with one misstep the brothers could disappear in the bayous before they even set foot on the trail—a trail that led to whatever legacy their father had left behind . . . and a secret worth killing for.

Treasure Mountain by Louis L'Amour
My rating: 3 of 5 stars

We're back with William Tell Sackett in this book and he's not my favorite Sackett. His introspective moments annoy me because he always thinks the same thing (I wanna settle down) but he never takes steps to achieve that goal. Tell's still carrying that baggage around in this book.

Through several books, we've heard of Pa Sackett -who is never named- and how he went west when Tell, Orrin, and Tyrel were kids. Pa Sackett never returned and is presumed dead. This story centers around finding out what happened to Pa Sackett.

L'Amour is notorious for his endings, the good guy always wins, and Pa Sackett didn't win. Of course, we don't get that story because it's not what L'Amour liked to write. Instead, we get Pa Sackett's story told in piecemeal through journal-entries that he left behind for his boys. I wish that we had Pa's story told through Pa's perspective.

I'm re-reading this series; my first exposure was through my grandfather reading to his grand kids and this book is one that I remember from childhood because my family discussed the name of one of the background characters, Judas Priest - was L'Amour a fan of the band? (We never researched the answer). The names of Pettigrew and Trelawney didn't register during my childhood but they pop out now because of JK Rowling - is Rowling a fan of L'Amour? Or did the two authors use the same naming-book? Who knows?!? Maybe it's just an interesting coincidence.