The Sky-Liners is the thirteenth book in The Sacketts series by Louis L'Amour. Available at Amazon, Barnes and Noble, and BooksAMillion. 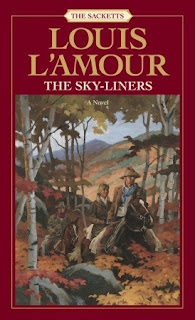 In The Sky-Liners, Louis L’Amour introduces Flagan and Galloway Sackett, heading west from Tennessee to seek their fortunes.

That’s when they came across an old Irish trader who offered them two fine horses if they would agree to escort his granddaughter, Judith, to her father in Colorado. Flagan saw nothing but trouble in the fiery young woman, but they needed the horses. Unfortunately, Flagan was right, for Judith had fallen for James Black Fetchen, a charismatic gunman whose courtship hid the darkest of intentions.


Now Fetchen and his gang are racing the Sackett brothers to Colorado—leaving behind a trail of betrayal, robbery, and murder. Flagan and Galloway can only guess why Judith is so important to Fetchen and what awaits them at her father’s ranch. One thing Flagan knows for sure: The tough and spirited woman has won his heart. But can he trust her with his life?

The Sky-Liners by Louis L'Amour
My rating: 2 of 5 stars

I was glad to (temporarily) leave William Tell Sackett behind but wasn't impressed with Flagan or Galloway either. And, as for Judith... don't get me started. She's the typical snot-nosed teen who wises up toward the end, but she doesn't feel solid or consistent. She starts out spoiled - I was reminded of Orrin's ex, Laura - until she sees Black Fetchen for what he is and comes to her senses; then, Judith becomes this meek, subservient creature proclaiming her love for Flagan. The romance is weak, there's no courtship and little interaction between her and her love, so I didn't buy it. And, because Judith reminded me of Laura, I expected her to be a turncoat, playing the Sacketts for Fetchen's advantage but the story isn't even strong enough to support that plot - ultimately, Judith fades into the background, just another love interest of the Sackett fellas. L'Amour missed an opportunity to give us a strong-female character.

This story is action-packed, especially toward the end. But, I'm still wondering about the horses. Flagan and Galloway are hired to escort Judith and several horses cross-country to Colorado. But the horses are stolen, along with some cows from a traveling cowpoke, and the Sackett boys go off chasing the cows and we never learn what happens to the horses. Nobody - not even Judith or her father, the owners of said horses - ever brings up their missing stock. I was probably supposed to assume that the horses became the horses that Fetchen and his gang rode but I chose to imagine the horses breaking free during one of the battle-scenes, running wild across the plains until some Lakota men (led by Michael and Eddie Spears, haha) rounds them up and rides off into the sunset (but feel free to go your own way with your own imaginings because L'Amour certainly didn't fill in the holes).

In short, the inconsistencies made it difficult for me to suspend my disbelief for this book.