The Lonely Men is the fourteenth book in The Sacketts series by Louis L'Amour. Available at Amazon, Barnes and Noble, and BooksAMillion. 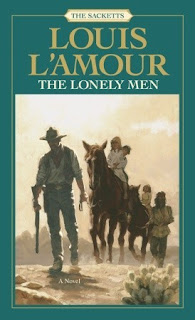 In The Lonely Men, Louis L’Amour spins the tale of a man who must elude an Apache trap—only to discover that his greatest enemy might be very close to home.

Tell Sackett had fought his share of Indians and managed to take something of value from his battles: a deep and abiding respect. But that respect is lost when Apache braves kidnap his nephew, forcing Tell to cross the border into the Sierra Madres to bring the boy back. What troubles Tell more, though, is the boy’s mother: Could she possibly be inventing a rescue mission to deliver her husband’s brother into an ambush?

Tell knows that the only things he can depend on are his wits and cold steel. But against such adversaries, even these formidable weapons may not be enough.

The Lonely Men by Louis L'Amour
My rating: 4 of 5 stars

William Tell Sackett won me over in this book. I wasn't expecting much because the previous stories about Tell have been so-so but he won me over when he went off to save a boy he hadn't even met.

And, for most of the book, we're given the Hollywood depiction of the Apache - fierce blood-thirsty warriors. L'Amour worked with the tools he had at the time. He counters the stereotype by giving us Kahtenny, the Apache equivalent of a Sackett. I kind of hope to see these two riding together in a future book (I'm not expecting it but L'Amour could surprise me).

Then, there's Dorset. We don't see her much, but we don't see her because she's strong enough to go off and do her own thing. I already like her better than Tell's dead wife Ange.

So this book picked me back up - the last couple books have felt monotone and repetitive but this book pulled back into the series.