Maybe it was a prodrome for a migraine or maybe it was just my general mood for the day - hell, I don't know why I think the way I think. I was on the exercise bike when I started this book, The Lonely Men by Louis L'Amour, so maybe I should blame endorphins. Whatever the cause, my imagination went off in a different direction than L'Amour intended.


It was hot. The shallow place where I lay atop the desert ridges was like an oven, the rocks like burning coals. Out on the flat below, where the Apaches waited, the heat waves shimmered and danced...

He said Apaches. This is what I envisioned.
Rick Mora. An entire tribe of Rick Moras. According to his Wikipedia page, Rick Mora is of "mixed Apache and Yaqui ethnicity."

The word Apache, also according to Wikipedia, "is the collective term for several culturally related groups of Native American tribes originally from the Southwestern United States" but "excludes the Navajo people."

Look at that, learn somethin' new e'ry day. You can learn more about the Apache by checking out these here pages for the federally recognized tribes:

And you can learn more about the Yaqui by checking out the Texas Band of Yaqui Indians and Pascua Yaqui Tribe.

It's not like the main character William Tell Sackett, whitey-white boy from Tennessee, would've known just by looking. Maybe, being a straight man and all, he couldn't see that he was looking at the imaginary Rick-Tribe from the wonderful world of moi.

Then they came, the two of them.

Somebody screamed, and I felt a body smash against me.

One was down but not out. I could see a little now, and when I started to come...

He threw me off and I fell, all sprawled out, and they both came...

...and I was lying there on the ground, gasping for breath...

I lifted everything that's italicized in this post directly from The Lonely Men by Louis L'Amour and I totally took it out of context. Please forgive me, spirit of Louis, I couldn't resist.

And hyper-sexualization of culture is a very real problem for Native Americans so please forgive me for drooling over Rick Mora but thank you for giving the world one of its most beautiful men. And men everywhere will just have to come to terms with the fact that I hyper-sexualize all hot men regardless of race, culture, or creed. 6,000-years of misogyny and I have a very finite amount of time in which to payback all the menfolk but, if you're a man and you're complaining, it's probably because you're not as pretty as Rick Mora. :) 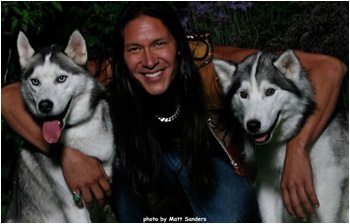