I'm a little off with reviews this week. A migraine knocked me on my ass for three days and I'm catching-up during the hangover phase today.

Mustang Man is the fifteenth book in The Sacketts series by Louis L'Amour. Available at Amazon, Barnes and Noble, and BooksAMillion. 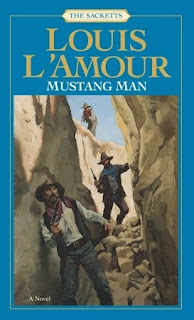 When Nolan Sackett met Penelope Hume in a cantina at Borregos Plaza, the girl immediately captured his attention. That she was heir to a lost cache of gold didn’t make her any less desirable.

But Penelope isn’t the only one after her grandfather’s treasure; Sylvie, Ralph, and Andrew Karnes, distant relatives with no legal claim to the gold, are obsessed with claiming the Hume fortune for themselves. Their all-consuming sense of entitlement recklessly drives them to ambush and murder. Even if Sackett and Penelope are fortunate enough to escape this deadly trio and find the canyon where the gold is hidden, Indian legend has it that nothing will live there—no birds or insects. They say it is filled with the bones of men.

Mustang Man by Louis L'Amour
My rating: 3 of 5 stars

We first encounter Nolan Sackett as an outlaw in previous books of The Sacketts but, when we get to Nolan in this book, he's ashamed of his ways - he wants to be more like his good and noble kinfolk, so much so that his character becomes repetitive, difficult to sort from among the other Sacketts.

The story would have been more interesting if Nolan had retained some of his outlaw-ways but that would've shortened the story considerably.