Galloway is the sixteenth book in The Sacketts series by Louis L'Amour. Available at Amazon, Barnes and Noble, and BooksAMillion. 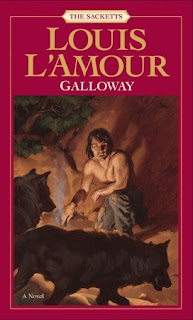 In Galloway, Louis L’Amour tells the story of two brothers who must struggle to survive in a wild and beautiful land to build themselves a ranch and a future.

Trouble was following Flagan Sackett with a vengeance. Captured and tortured by a band of Apaches, he escaped into the rugged San Juan country, where he managed to stay alive until his brother Galloway could find him.

But the brothers were about to encounter worse trouble ahead. Their plan to establish a ranch angered the Dunn clan, who had decided that the vast range would be theirs alone. Now Galloway and Flagan would face an enemy who killed for sport—but as long as other Sacketts lived, they would not fight alone.


Galloway by Louis L'Amour
My rating: 2 of 5 stars

Of all The Sacketts, this book has been the most unrealistic (which isn't saying much because all the frontier-tales are painted with the same brush as tall-tales). We start of with Flagan successfully stealing a dead elk from an entire pack of wolves - while he's naked, unarmed, and injured. The story doesn't get much better from there, though we do see L'Amour break his usual narrative technique to play around with some minor POV changes (but he abandons the technique about half-way through the book).

The book is named after Galloway, Flagan's brother, but Galloway doesn't figure into the story much. He winds up on guard-patrol in in the background, not contributing much to the story. I couldn't help but wonder if L'Amour mixed up the brothers' names while writing?

Flagan takes center-stage...again. We read about him in The Sky-Liners, where he won over his lady-friend Judith, so I expected this book to be about Galloway finding his own beau. There's no mention of Flagan's recent past.

Then, add dull villains who are more bark than bite...

You get a book that's not the best in the series.