War Party is the tenth book in The Sacketts series by Louis L'Amour. Available at Amazon, Barnes and Noble, and BooksAMillion. 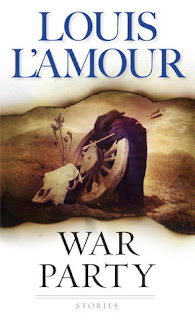 Bud Miles was a boy when he crossed the Mississippi. But Bud buried his father after an Indian  attack, and as the wagon train pushed on through  Sioux country, the boy stood as tall as any man...

Tell Sackett killed cougars at fourteen and fought a  war at fifteen. Now Tell was hauling dangerous  freight--a soldier's wife and a fortune in  gold--knowing that someone wanted him dead...

Laurie Bonnet  was a mail-order bride who thought she was a  failure on the frontier. But when the chips were down,  she was the only one who could save her husband's life...

In these marvelous stories of the West, Louis L'Amour tells of travelers, gunfighters, homesteaders, and adventurers: men and women making  hard and sudden choices and fighting battles that could cut a person's life short--or open up a bold new future on the American frontier.

War Party by Louis L'Amour
My rating: 4 of 5 stars

I love short stories and L'Amour does them well. Booty for a Badman is the story of interest to Sackett fans but it isn't my favorite in this collection, partly because I don't like Tell's attitude toward the lady he helps.

The Gift of Conchise took my favorite spot, followed by War Party, both for featuring strong female characters. Those two stories alone make this collection worth reading (especially to younger gals).

Alkali Basin still has me perplexed; I've missed something with that story.

But, on the whole, this collection is a quick entertaining read.