The Sackett Brand is the twelfth book in The Sacketts series by Louis L'Amour. Available at Amazon, Barnes and Noble, and BooksAMillion. 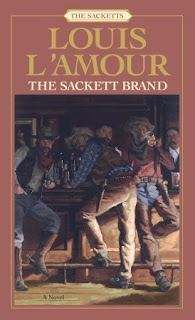 In The Sackett Brand, Louis L’Amour spins the story of a courageous man who must face overwhelming odds to track down a killer.

Tell Sackett and his bride, Ange, came to Arizona to build a home and start a family. But on Black Mesa something goes terribly wrong. Tell is ambushed and badly injured. When he finally manages to drag himself back to where he left Ange, she is gone. Desperate, cold, hungry, and with no way to defend himself, Tell is stalked like a wounded animal. Hiding from his attackers, his rage and frustration mounting, he tries to figure out who the men are, why they are trying to kill him, and what has happened to his wife. Discovering the truth will be risky. And when he finally does, it will be their turn to run.

The Sackett Brand by Louis L'Amour
My rating: 3 of 5 stars

I know this much, I'm tired of reading about William Tell Sackett. I had a difficult time starting this book because I don't care for Tell or his gal, Ange, and the blurb mentions that this book is about them starting their life in Arizona.

But then... L'Amour did something I didn't expect with Ange. I'm not saying what, but it definitely pulled me back into the story.

And, unlike the previous stories in the series, the bad guy -and his motivation for the crime- isn't so obvious in this book. You know which outfit is to blame, but there's forty men involved so you have to stick with the story to the end to find out the whos and whys. That's a nice change of pace.

I've mentioned in previous reviews that I think L'Amour was instrumental in starting the changes in the way Hollywood portrays Native Americans. In this book, L'Amour points out "what the Army had done to the Apaches" (this particular reference is on page 147 of the mass-market paperback but L'Amour mentions the subject a couple of times before then). L'Amour worked with the tools that he had at his disposal.

This story introduces a whole slew of new Sacketts, as the family pulls together to save one of their own. I know I get Flagan and Galloway Sackett in the next book and I'm looking forward to a break from Tell.