Ride the River (The Sacketts #5)

Ride the River is the fifth book in The Sacketts series by Louis L'Amour. Available at Amazon, Barnes and Noble, and BooksAMillion. 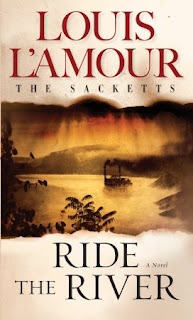 In Ride the River, Louis L’Amour spins the tale of a young woman who has to protect her family fortune from a murderous thief and teach him what it means to be a Sackett.

Sixteen-year-old Echo Sackett had never been far from her Tennessee home—until she made the long trek to Philadelphia to collect an inheritance. Echo could take care of herself as well as any Sackett man, but James White, a sharp city lawyer, figured that cheating the money from the young girl would be like taking candy from a baby. If he couldn’t hoodwink Echo out of the cash, he’d just steal it from her outright. And if she put up a fight? There were plenty of accidents that could happen to a country girl on her first trip to the big city.

Ride the River by Louis L'Amour
My rating: 5 of 5 stars

This book was a delightful surprise. I wasn't expecting much from the main character, Echo Sackett, because L'Amour's female characters in other books are often flat and one-dimensional. He blew me away with a strong female character.

I adored the ending of this book, mostly because I expected a different ending (the typical fairy tale ending - girl gets in trouble, dude rides in on a white horse to rescue her). On several occasions, L'Amour sets up a deus ex machina, only to have Echo sidestep it or pull the rug out from under it by making decisions of her own. Echo ain't no fancy city lady waiting for a man to come save her. She's a mountain girl, born and bred in Appalachia (Tennessee), and more than capable of taking care of her dang self.

This book can read as a stand-alone from the rest of the series and I highly recommend it for young adult females.