Mojave Crossing is the eleventh book in The Sacketts series by Louis L'Amour. Available at Amazon, Barnes and Noble, and BooksAMillion. 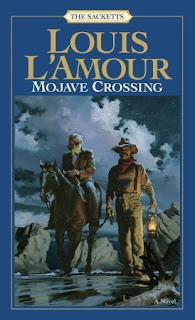 In Mojave Crossing, Louis L’Amour takes William Tell Sackett on a treacherous passage from the Arizona goldfields to the booming town of Los Angeles.

Tell Sackett was no ladies’ man, but he could spot trouble easily enough. And Dorinda Robiseau was the kind of trouble he wanted to avoid at any time—even more so when he had thirty pounds of gold in his saddlebags and a long way to travel. But when she begged him for safe passage to Los Angeles, Sackett reluctantly agreed.

Now he’s on a perilous journey through the most brutal desert on the continent, traveling with a companion he doesn’t trust . . . and headed for a confrontation with a deadly gunman who also bears the name of Sackett.

Mojave Crossing by Louis L'Amour
My rating: 3 of 5 stars

William Tell Sackett is not my favorite of the Sackett fellas. There's something about him that annoys me; maybe it's all the stupid decisions he makes, like wandering through the desert with no water and no exact idea of where water can be found. Why didn't he double back and get behind the crooks following him? It's the little things that make or break a man. I know I definitely wouldn't hire Tell to be my guide through the west.

I spent three-quarters of the book wondering where Tell's gal disappeared to, even though I don't like Ange and wasn't put out by not reading about her. I thought I had messed up the chronology of the series but then, near the end of the story, L'Amour explains her absence. It would've been nice to know that information earlier.

The biggest appeal (for me) about this story is that one of the antagonists is a female, the first time we've seen L'Amour break the "girls are sugar and spice" ideology (and her involvement is obvious so this isn't a spoiler). And it was a pretty good crime too, if only she'd gotten away with it.

We also meet Nolan Sackett in this story and hear about him being an outlaw. What all has ol' Nolan done, to be branded an outlaw? That's a story I'd like to read.