Jubal Sackett is the fourth book in The Sacketts series by Louis L'Amour. Available at Amazon, Barnes and Noble, and BooksAMillion.


Sackett's Land
To The Far Blue Mountains
The Warrior's Path 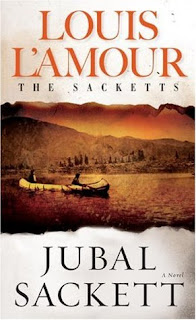 In Jubal Sackett, the second generation of Louis L’Amour’s great American family pursues a destiny in the wilderness of a sprawling new land.

Jubal Sackett’s urge to explore drove him westward, and when a Natchez priest asks him to undertake a nearly impossible quest, Sackett ventures into the endless grassy plains the Indians call the Far Seeing Lands.

He seeks a Natchez exploration party and its leader, Itchakomi. It is she who will rule her people when their aging chief dies, but first she must vanquish her rival, the arrogant warrior Kapata. Sackett’s quest will bring him danger from an implacable enemy . . . and show him a life—and a woman—worth dying for.

Jubal Sackett by Louis L'Amour
My rating: 4 of 5 stars

This has been my favorite book in the series so far - would've been five-star if L'Amour had just left out the animals, the first being Jubal's pet buffalo and the second being the Mammoth/Mastodon. Pure fantasy on L'Amour's part and I had problems buying it. Through his entire body of work, L'Amour repeatedly mentions that Columbus wasn't the first to discover America - the Mammoth scene in this book made me think that maybe L'Amour should've stepped out of this series to do another stand-alone (like The Walking Drum) about prehistoric America. I think he would've enjoyed it and I'd have liked to read it.

But, aside from that element, this book provides everything a good story offers - history/local lore, romance (without pages of gazing into each other's eyes and mushy conversations), violence with multiple villains. Also, the telling of this story is less choppy than the previous books in the series.

In previous reviews, I stated that I cast Brad Pitt as Barnabas Sackett, and then, because of similarities between Kin and his daddy Barny, I also recast a younger Mr. Pitt to play the Kin that I imagined while reading. At the start of this book, L'Amour tries to emphasis that, of all of Barnabas' sons, Jubal is the most like him. I disagree. Jubal is more introverted and more of a strategist than his daddy, so I did cast a different actor to play the Jubal in my mind - Travis Fimmel. And I do mean Viking-Ragnar Fimmel with all that sexy bearded glory and not the metrosexualized Fimmel hanging out in his underwear (FYI, I didn't find Fimmel attractive until he grew the beard).

A young Sheila Tousey became Itchakomi, Jubal's love-interest, and Rick Mora (because only someone who is extra-pretty can stand beside Fimmel's gorgeous beard and not get lost in the background) became Jubal's Indian sidekick (in this context, I'm specifically referring to the Hollywood trope because Keokotah is definitely Jubal's Tonto. Oh, and you can plug in Rick at any age - that man is just down right beautiful).

And, of course, because I adore Jubal and want to know what happens next, this is the last we'll see of him. The time-chronology jumps 200-years forward in the next book, Ride the River. I really would've enjoyed a next book for Jubal.