To The Far Blue Mountains

I've posted about The Sacketts by Louis L'Amour before in this post, The Walking Drum, where I talked about the influence of my grandfather on my choice to read this series.

One line in this book jumped out at me. Barnabas is thinking about the name of his first-born son:

"Kin Ring Sackett...the name had a sound, and it was a sound that I loved."

I had to put the book down for a minute because that line made me bawl like a baby (I almost always fight back tears when babies are involved). And then, ah-ha, I had an idea. I, infertile woman that I am, will probably use this quote on plaques to decorate the bedroom walls of my future adopted children. Something like this:

insert child's full name in fanciful letters
"...the name had a sound, and it was a sound that I loved."
(To The Far Blue Mountains, Louis L'Amour)

What kind of bibliophile would I be if I didn't adorn the bedroom walls of my children's bedrooms with book quotes? Especially this one, since I pack so much connection with my grandfather into this series? I just thought that this could be a good way to share with the children of my heart the great-grandfather that they will never get to meet (Ira Blaine's been gone but not forgotten for fifteen years now).

And that made me cry even harder. I think that means I must follow-through (and I should probably check with the hubs first but since he usually lets me do whatever the hell I want...).

Here's my review of the first book in the series: Sackett's Land.

To The Far Blue Mountains by Louis L'Amour is available at Amazon, Barnes and Noble, and BooksAMillion. 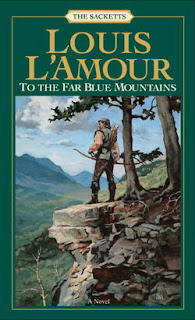 In To the Far Blue Mountains, Louis L’Amour weaves the unforgettable tale of a man who, after returning to his homeland, discovers that finding his way back to America may be impossible.

Barnabas Sackett was leaving England to make his fortune in the New World. But as he settled his affairs, he learned that a royal warrant had been sworn out against him and that men were searching for him in every port. At issue were some rare gold coins Sackett had sold to finance his first trip to the Americas—coins believed to be part of a great treasure lost by King John years before.

Believing that Sackett possesses the rest of the treasure, Queen Bess will stop at nothing to find him. If he’s caught, not only will his dream of a life in America be lost, but he will be brutally tortured and put to death on the gallows.

To the Far Blue Mountains by Louis L'Amour
My rating: 3 of 5 stars

The continued story of Barnabas Sackett, the grand-sire of The Sackett legacy, leaving his home in England behind to build a new home in the western frontier, what will become the American colonies.

The first book, Sackett's Land, has a plot propelled by action; To The Far Blue Mountains is choppier, with L'Amour using brief summaries to skim great gaps of time. I enjoy how L'Amour works in tiny details about history - like that seafarers had long been coming to America - so I felt slightly cheated with the skimming of Barnabas' life and would have liked more details about starting a new life in America. The first book introduced me to the character; but the second book felt like I was reading a time-line of events instead of getting the full story. This second half of Barnabas' life lacked the emotional punch-in-the-guts that I expected at the end of the book.

L'Amour never intended to write literary wonders but told stories reminiscent of campfire tales or oral folklore. Sometimes outrageous and requiring suspended disbelief, this is a foray into pure imagination of bygone times.