The Warrior's Path is the third book in The Sacketts series by Louis L'Amour. Available at Amazon, Barnes and Noble, and BooksAMillion. 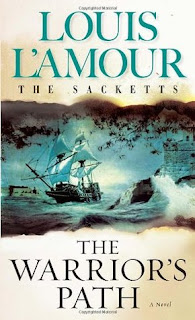 Filled with exciting tales of the frontier, the chronicle of the Sackett family is perhaps the crowning achievement of one of our greatest storytellers.In The Warrior’s Path, Louis L’Amour tells the story of Yance and Kin Sackett, two brothers who are the last hope of a young woman who faces a fate worse than death.

When Yance Sackett’s sister-in-law is kidnapped, he and Kin race north from Carolina to find her. They arrive at a superstitious town rife with rumors—and learn that someone very powerful was behind Diana’s disappearance. To bring the culprit to justice, one brother must sail to the exotic West Indies.

There, among pirates, cutthroats, and ruthless “businessmen,” he will apply the skills he learned as a frontiersman to an unfamiliar world—a world.

The Warrior's Path by Louis L'Amour
My rating: 3 of 5 stars

I had a hard time getting through this book, despite the interesting topics - the promise of a witch, Native Americans, pirates, and some gorgeous descriptions of 17th-century American forests.

Kin Ring Sackett takes over as narrator from his father Barnabas and the two are nearly identical in nature, so much so that I forgot I was seeing the world through another character's senses. I wish L'Amour had taken a little more time to develop unique characters; it would help the plot feel less like a pot-boiler, which it is (the ending is predictable for anyone well read in historical fiction).

It doesn't help that certain topics are hinted at but never fully explored - Diana's witchcraft is gossiped about but this is just a device moving the plot forward, an explanation for why she's shunned by her community. Those plot-threads fall by the wayside with the accusations of witchcraft left unexplored. There weren't many Native Americans either. Forget the TV mini-series created back in the 70s; I recast the roles for my imagination. I have certain Native American public figures that I frequently use in my imaginings - Rick Mora, Wes Studi, the Spears brothers, Zahn McClarnon - because, well, yum (I like beautiful men of all nationalities). The Inyuns (a Creole word, don't get all racist on me) are spotted moving through the woods, but always at a distance so there's few interactions with them and I didn't get to plug in hotties very often (however, I did cast Brad Pitt as Barnabas Sackett while reading the first two books and, because of the similarities between Barnabas and Kin, continued to use young-Brad for Kin. I wouldn't be surprised to see me use Mr. Pitt for my imaginings of other characters in future books either).

This book hits novella-length instead of novel so the reading went quickly. In some ways, it feels like this story may have been an attempt to fill in the gaps between the characters of Barnabas and Jubal, the main character in the next book in the series (which is actually a novel and not a novella - I have higher hopes for the next book).