I inherited my bibliophilia from my grandfather, Ira Blaine - he mourned the death of Louis L'Amour the way I mourn the death of Terry Pratchett.

I'm not quite ready to talk about my sleep-issues in detail but one of the symptoms of my disorder is that dreams are recorded like memories, which basically means they don't fade like dreams normally do. Some of my earliest memories are of nightmares and hypnogogic/hypnopompic bumps in the night. What sucks is that I actually waste brain-space with memories of dreams - I can remember the nightmare of insect-aliens pouring out of my pawpaw's mouth better than I can recall him reading to me, which he did in real life. He never read us kiddos children's books but, while I can remember sitting at his knee and listening, I can't tell you much about what he did read to us. I suspect The Sacketts, as several of my kinfolk followed that series, so it's on my to-read list too.

What I do recall is him discussing Louis L'Amour's The Walking Drum with my older cousins - it wasn't his favorite book by L'Amour, but he read everything L'Amour published, so I decided to start with this book. I'm hoping that maybe the re-reads will jog my memory, maybe displace the nightmare with something real. Because, of all the things this sleep-issue has done to me, that is the worst. I'd give anything to switch the clarity of the nightmare-memories with the clarity of the real-life memories of my grandfather. Wish me luck.

The Walking Drum by Louis L'Amour is available at Amazon, Barnes and Noble, and BooksAMillion. 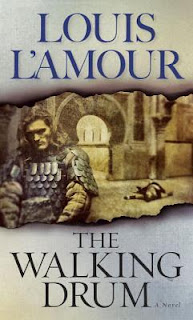 Louis L’Amour has been best known for his ability to capture the spirit and drama of the authentic American West. Now he guides his readers to an even more distant frontier—the enthralling lands of the twelfth century.
Warrior, lover, and scholar, Kerbouchard is a daring seeker of knowledge and fortune bound on a journey of enormous challenge, danger, and revenge. Across Europe, over the Russian steppes, and through the Byzantine wonders of Constantinople, Kerbouchard is thrust into the treacheries, passions, violence, and dazzling wonders of a magnificent time.
From castle to slave galley, from sword-racked battlefields to a princess’s secret chamber, and ultimately, to the impregnable fortress of the Valley of Assassins, The Walking Drum is a powerful adventure in an ancient world that you will find every bit as riveting as Louis L’Amour’s stories of the American West.

The Walking Drum by Louis L'Amour
My rating: 3 of 5 stars

The story structure is a roller coaster - after Mathurin Kerbouchard's mother is killed, he begins the quest to find his father who is rumored to have been captured or killed in battle. Sounds easy but it ain't - his inquisitiveness sets him up against multiple foes that enable him to rescue several pretty ladies, all of whom help him reach his goal of finding out what happened to his dad.

The writing style is reminiscent of the 60s and 70s (lack of punctuation, missing the word that, etc), with a strong masculine flavor.

Historical information packs this novel but the story doesn't always seam up with it well; the information sometimes feels out of place and, at times, lengthy (though L'Amour fails to challenge Tolkien's lengthy descriptions). Would have been interesting to see L'Amour tackle this time period in a nonfiction piece.