The Goddess of Buttercups and Daisies

Martin Millar is an author I adore (I've never met the man but I have a feeling that he's one of those people I'd try to feed...a lot. No cheek-pinching, that's not my style, but I'd probably drive him bonkers with food offerings).

Millar is one of those authors whose works read well among all genders (no overt masculine tones balanced by no overt feminine tones). This was especially noticeable to me with Millar's newest book, probably because this reading followed the reading of The Walking Drum by Louis L'Amour (who didn't give the world the greatest female characters).

The Goddess of Buttercups and Daisies by Martin Millar is available at Amazon, Barnes and Noble, AbeBooks, and BooksAMillion. 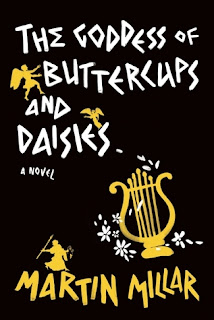 Aristophanes is inconsolable—his rival playwrights are hogging all the local attention, a pesky young wannabe poet won’t leave him alone, his actors can’t remember their lines, and his own festival sponsor seems to be conspiring against him, withholding direly needed funds for set design and, most importantly, giant phallus props. O woe, how can his latest comedy convince Athenian citizens to vote down another ten years of war against Sparta if they’re too busy scoffing at the diminutive phalluses? And why does everyone in the city-state seem to be losing their minds?

Wallowing in one inconvenience after another, Aristophanes is unaware that the Spartan and Athenian generals have unleashed Laet, the spirit of foolishness and bad decisions, to inspire chaos and war-mongering in Athens. To counteract Laet’s influence, Athena sends Bremusa, an Amazon warrior, and Metris, an endearingly airheaded nymph (their first choice was her mother Metricia, but she grew tired of all the fighting and changed back into a river).

Dashing between fantastical scenes of moody and meddlesome gods, ever-applicable political debates in the senate, backstage scrambling for the play, and glimpses of life in Ancient Greece, Martin Millar delivers another witty and comical romp for readers of all ages.

Goddess of Buttercups & Daisies: A Novel by Martin Millar
My rating: 4 of 5 stars

A modern spin on the ancient world showing parallels of human nature between then and now.

Set in Athens of Ancient Greece during the City Dionysia (the festival of Dionysus) after 10-years of war with Sparta.

The story is told through multiple POVs. Some characters are fictional; some, like Luxos the poet and Metris the demi-goddess, are figments of Millar's imagination but a few characters, like Athena and Bremusa, are borrowed from mythology. And a couple characters, like Aristophanes and Socrates, are based on real historical figures.
I'm sure I missed some of the puns - it's been years since I studied Greece and this book does require some acquaintance with the ancient world to maximize enjoyment. Even so, it was still a fun, quick read that provided a nice break from the world.