I've started reading The Sacketts by Louis L'Amour like I mentioned in my post about The Walking Drum.

Sackett's Land is available at Amazon, Barnes and Noble, and BooksAMillion. 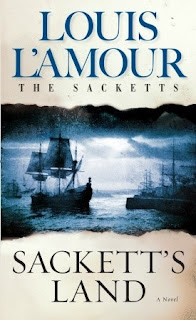 After discovering six gold Roman coins buried in the mud of the Devil’s Dyke, Barnabas Sackett enthusiastically invests in goods that he will offer for trade in America.

But Sackett has a powerful enemy: Rupert Genester, nephew of an earl, wants him dead. A battlefield promise made to Sackett’s father threatens Genester’s inheritance. So on the eve of his departure for America, Sackett is attacked and thrown into the hold of a pirate ship. Genester’s orders are for him to disappear into the waters of the Atlantic.

But after managing to escape, Sackett makes his way to the Carolina coast. He sees in the raw, abundant land the promise of a bright future. But before that dream can be realized, he must first return to England and discover the secret of his father’s legacy.

Sackett's Land by Louis L'Amour
My rating: 4 of 5 stars

My grandpa read L'Amour's frontier stories to me when I was a wee gal sitting at his knee on the back porch of his West Virginia home so this is technically a nostalgic re-reading for me.

This is the story of Barnabas, the grand-sire of The Sackett legacy, and how forces beyond his control wrangled the young man from the English fens to set him on the western path to America.

An evolved dime-novel with fast-paced action and a hero whose can-do attitude always helps him win. L'Amour never intended to write literary wonders but told stories reminiscent of campfire tales or oral folklore. Sometimes outrageous and requiring suspended disbelief, this is a foray into pure imagination of bygone times.