The 2015 Appalachian Queer Film Festival, located in Lewisburg, West Virginia, has announced their film lineup for this year's event, October 1-4.

The Appalachian Queer Film Festival is an annual celebration of queer film and Appalachian culture that seeks to soften hearts and broaden minds, breaking down stereotypes about both queer and Appalachian people. 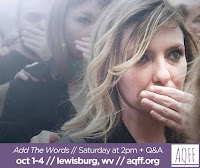 Since 2006 the LGBT community and human rights supporters have asked Idaho lawmakers to add the words sexual orientation and gender identity to the Idaho Human Rights Act. For 8 years Idaho activists were told to wait a little longer for the political climate to improve. With their left hands covering their mouths to symbolize how Idaho legislators have worked to silence them, they began a successful civil disobedience campaign in the name of human rights.

On Christmas Eve, trans woman sex worker Sin-Dee Rella, who has just finished a twenty-eight day prison sentence, meets her best friend Alexandra, also a trans sex worker, at Donut Time in Hollywood. Alexandra informs Sin-Dee that her boyfriend and pimp Chester has been cheating on her with a white cisgender woman, Dinah. Outraged, Sin-Dee storms out of Donut Time to search the neighborhood for Chester and Dinah, the "fish" he has been sleeping with.
As Sin-Dee searches for Chester and Dinah and Alexandra prepares for her stage show in West Hollywood, Razmik, an Armenian cab driver, drives clients around Los Angeles to raise money for the girls' company under the nose of his suspecting mother-in-law.

JT LeRoy was a teen prostitute, addicted to heroin and infected with HIV, when a therapist encouraged him to write his life story. Buoyed by a cadre of celebrities, he published three critically acclaimed books, including Sarah and The Heart is Deceitful Above All Things. But as his fame skyrocketed, the shocking truth emerged: JT was not what he seemed. What followed was a downfall as bewildering as it was tragic. Drawn into LeRoy’s inner circle before the truth came to light, filmmaker Marjorie Sturm was misled like many others. Through intimate interviews with many close to the tarnished figure, Sturm attempts to untangle what really happened, and in the process explores how his deception called into question not only the value of LeRoy’s writing absent authenticity, but our culture’s complicity with the author’s seductive cult of personality. 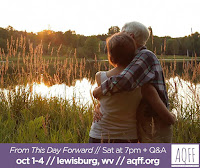 From This Day Forward (2015)
Directed by: Sharon Shattuck
Documentary; 95 min

When director Sharon Shattuck's father came out as transgender, Sharon was in the awkward throes of middle school. Her father's transition to female was difficult for her straight-identified mother to accept, but her parents remained married. As Sharon approaches her own wedding day, she returns home to Michigan to ask her parents how their love survived against all odds. 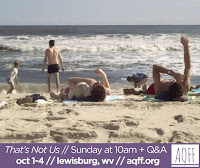 That’s Not Us (2015)
Directed by: William Sullivan
Narrative Feature; 97 min
That's Not Us is an intimate portrait of three twenty-something couples as they travel to a beach house to enjoy the last days of summer. But what should be a fun and carefree weekend becomes an exploration of what it takes to sustain a healthy relationship and make love last in what is now being called the "gayest generation." Through each of the three couples - one gay, one lesbian, and one straight - That's Not Us explores sex and relationships with a fresh perspective, finding that while sexuality and gender may vary, the struggles to keep love alive do not.

From the archives of the “queer Smithsonian,” San Francisco’s GLBT Historical Society, comes the forgotten history of a gay Korean War veteran tasked with writing the military discharges of outed gay seamen. The Typist details a conflicted clerk’s participation in discrimination and his divided allegiance to homosexuality and heroism.

Been Too Long at the Fair (2015)
Directed by: Charles Lum, Todd Verow
DocShort: 6 min

Do others treat us like puppets or are we the ones who let them treat us that way? The future of a sensitive child is marked by an "experience" as a puppet and by the intimate bond he has with male dolls.

A lonely young man rhythmically narrates his leap from isolation to ecstasy when he meets a beautiful stranger in a bar.

Check out the Festival’s full schedule at http://bit.ly/AQFF2015Schedule.