Dry Bones (Longmire Mystery #11) by Craig Johnson is available at Amazon, Barnes and Noble, and BooksAMillion. 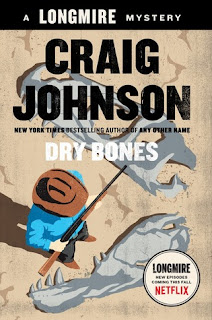 When Jen, the largest, most complete Tyrannosaurus rex skeleton ever found surfaces in Sherriff Walt Longmire’s jurisdiction, it appears to be a windfall for the High Plains Dinosaur Museum—until Danny Lone Elk, the Cheyenne rancher on whose property the remains were discovered, turns up dead, floating face down in a turtle pond. With millions of dollars at stake, a number of groups step forward to claim her, including Danny’s family, the tribe, and the federal government. As Wyoming’s Acting Deputy Attorney and a cadre of FBI officers descend on the town, Walt is determined to find out who would benefit from Danny’s death, enlisting old friends Lucian Connolly and Omar Rhoades, along with Dog and best friend Henry Standing Bear, to trawl the vast Lone Elk ranch looking for answers to a sixty-five million year old cold case that’s heating up fast.

Dry Bones by Craig Johnson
My rating: 4 of 5 stars

I received an advanced uncorrected proof-copy of this book from GoodReads First Reads in exchange for a review. My review comes after the publication of the book because I decided to read the entire series.

Walt doesn't care about the politics surrounding the discovery of "the largest, most complete fossil of a Tyrannosaurus rex," ever found - right in Walt's backyard, Absaroka County, WY - until the murder of Danny Lone Elk, the owner of the land that contained the fossil. This case is difficult to solve because there are few clues; readers get stuck waiting with Walt, watching the emotionally charged sh*t-storm brewing among those who stand to inherit the dinosaur until Mother Nature forces a deus ex machina via a storm of her own, one that blows away all the emotional stench, allowing Walt - along with readers - to see the whos, whats, and whys behind the case.

The deviations between Longmire the show and Longmire the book-series continue to grow with each book, particularly in regard to personal relationships. And the gap between the two is now of Grand Canyon proportions.

Walt has an important conversation with his lover. Like every other book in this series, I have to wait for the next book to see what happens next. And poor, poor Cady. You'll get no spoilers, but I'm ready for the next book just so I can see what decisions she makes.

The way Johnson handles personal relationships is something I adore about this series. We get the briefest of snippets that only whet our appetites; if you want to appreciate the romance, you have to read every single book. It's a plot-device that Johnson handles well and it works because it keeps bringing me back for more.