Any Other Name (Longmire Mysteries #10)

Any Other Name (Longmire Mysteries #10) by Craig Johnson is available at Amazon, Barnes and Noble, and BooksAMillion. 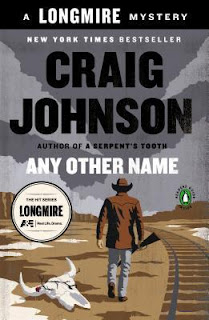 
Sheriff Walt Longmire had already rounded up a sizable posse of devoted readers when the A&E television series Longmire sent the Wyoming lawman’s popularity skyrocketing. Now, with three consecutive New York Times bestsellers to his name and the second season of Longmire reaching an average of 5.4 million viewers per episode, Craig Johnson is reaching a fan base that is both fiercely loyal and ever growing.

In Any Other Name, Walt is sinking into high-plains winter discontent when his former boss, Lucian Conally, asks him to take on a mercy case in an adjacent county. Detective Gerald Holman is dead and Lucian wants to know what drove his old friend to take his own life. With the clock ticking on the birth of his first grandchild, Walt learns that the by-the-book detective might have suppressed evidence concerning three missing women. Digging deeper, Walt uncovers an incriminating secret so dark that it threatens to claim other lives even before the sheriff can serve justice—Wyoming style.

Any Other Name: A Longmire Mystery by Craig Johnson
My rating: 4 of 5 stars

Once again, Walt's family gets pushed aside because he's like a hound on a scent, trying to find a murderer and three missing women. But Walt's loved ones should be used to it by now - every book in this series has built up that aspect of him. That's what makes Walt legendary - he goes above and beyond the call of duty. He doesn't give up.

I love how this series draws out the personal relationships between characters over the course of several books. Half the time, I come back just for those brief snippets of romance, be it between Walt and his daughter, Cady, or Walt and his bestie, Henry Standing Bear, or Walt and his lover (I've not mentioned a spoiler in the reviews of this series; I ain't starting now. But, for those of you who have only seen the show, Walt has a lover and you need to read the whole series to get that story-line because it's offered up piecemeal through every book).

The briefness of those "family moments" juxtapositioned around the brutality of Walt's job adds a poignancy to those moments that isn't captured in straight up romance-novels. I love how Johnson handles that plot device - it works because it keeps bringing me back for more.