I posted previously about Longmire.

The Cold Dish (Longmire Mysteries #1) by Craig Johnson is available at Amazon, Barnes and Noble, and BooksAMillion. 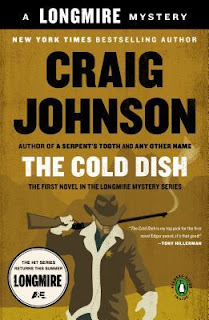 Introducing Wyoming’s Sheriff Walt Longmire in this riveting novel from the New York Times bestselling author of Hell Is Empty and As the Crow Flies, the first in the Longmire Mystery Series, the basis for LONGMIRE, the hit drama series.

Johnson draws on his deep attachment to the American West to produce a literary mystery of stunning authenticity, and full of memorable characters. After twenty-five years as sheriff of Absaroka County, Walt Longmire’s hopes of finishing out his tenure in peace are dashed when Cody Pritchard is found dead near the Northern Cheyenne Reservation. Two years earlier, Cody has been one of four high school boys given suspended sentences for raping a local Cheyenne girl. Somebody, it would seem, is seeking vengeance, and Longmire might be the only thing standing between the three remaining boys and a Sharps .45-70 rifle.

With lifelong friend Henry Standing Bear, Deputy Victoria Moretti, and a cast of characters both tragic and humorous enough to fill in the vast emptiness of the high plains, Walt Longmire attempts to see that revenge, a dish best served cold, is never served at all.

The Cold Dish by Craig Johnson
My rating: 4 of 5 stars

This is one of those rare occasions when I saw the show before I read the books because I hadn't heard of the Longmire Mysteries, even though Johnson is a West Virginia fella (who relocated to Wyoming). TV introduced me to the series and the show caught my attention for one simple reason: Lou Diamond Phillips, who plays Henry Standing Bear (I love seeing LDP do a great job in a western again).

Longmire the show is true to Longmire the book series in the same way that Midsomer Murders was true to Caroline Graham's books. When the show covers one of the books, the ending is vastly different from the way the book ends which keeps the episodes/books fresh for first exposures. I view Longmire the same way I do Midsomers, it's a two for one deal where I get more stories.