I've posted about Longmire before and you can see my review of the first book in this series here: The Cold Dish (Longmire Mysteries #1).

Death Without Company (Longmire Mysteries #2) by Craig Johnson is available at Amazon, Barnes and Noble, and BooksAMillion. 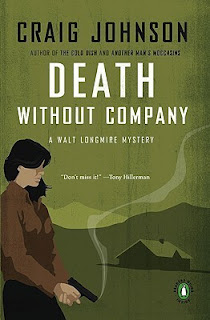 Walt investigates a death by poison in this gripping novel from the New York Times bestselling author of The Cold Dish and As the Crow Flies, the second in the  Longmire Mystery Series, the basis for LONGMIRE, the hit A&E original drama series.

Fans of Ace Atkins, Nevada Barr and Robert B. Parker will love Craig Johnson, New York Times bestselling author of Hell Is Empty and As the Crow Flies, who garnered both praise and an enthusiastic readership with his acclaimed debut novel featuring Sheriff Walt Longmire, The Cold Dish, the first in the Longmire Mystery Series, the basis for LONGMIRE, the hit A&E original drama series. Now Johnson takes us back to the rugged landscape of Absaroka County, Wyoming, for Death Without Company. When Mari Baroja is found poisoned at the Durant Home for Assisted Living, Sheriff Longmire is drawn into an investigation that reaches fifty years into the mysterious woman’s dramatic Basque past. Aided by his friend Henry Standing Bear, Deputy Victoria Moretti, and newcomer Santiago Saizarbitoria, Sheriff Longmire must connect the specter of the past to the present to find the killer among them.

Death Without Company by Craig Johnson
My rating: 5 of 5 stars

As I stated in my review of The Cold Dish, I was introduced to the Longmire Mysteries series by the show and I like how the show gives us a different ending to the plots in the books because it keeps both formats fresh. This might frustrate some folks - those who want the show to be exactly like the books - because it mangles some of the on-going threads running through the series. I'm hoping the show will eventually get to those threads in its own way at a later date.

The biggest, and obvious, differences between the show and the books are with the characters. The show plays with their physical appearances and backgrounds (drawing out some plot-threads, diminishing others) but remains true to each characters' "spiritual essence." Robert Taylor (swoon) makes Walt Longmire a little more handsome than he should be. The book's Vic Moretti is a small brunette more than capable of going head to head with the fellas where the show depicts her as a tall and lithe bottle blond, still more than capable (and I'm in love with both versions of her - I love me some b'dass females). Henry Standing Bear is an actual Cheyenne and I don't have to pretend away Lou Diamond Phillip's Filipino-Spanish-Irish-Cherokee heritage (not complainin' about his part in the role 'cause LDP is pretty easy on the eyes too).

And, the biggest character difference of all, Branch Connally appears to be a conglomeration of different characters from the book and his uncle Lucian doesn't appear in the show nearly as much as he does in the book series. Especially this book, where Lucian is at the center of the plot: an unsolved murder from his days as sheriff.

And one of the reasons I liked this book so much is because I feel like I got a better look at the characters. Especially Walt - understanding his mentor gives me the chance to understand him better.

I don't like giving spoilers but other reviewers have already complained of the rape scene so it's out there in the multiverse. Yes, this book is a trigger for those coping with such trauma. I'm a rape victim and, though the scene is disturbing because of it's content, I wasn't disturbed to read it because, unfortunately, this kind of stuff does happen and real-life law enforcement has to deal with these scenarios every day of the week. I'm glad Johnson didn't turn away from the subject because it's "too hard" or "disturbing to think about." Ignoring rape or pretending it away is what allows these situations to keep happening. Rapists operate best when no one is paying attention. So you will see no dissing of Johnson's rape coverage here - rape is a hard topic to write about and I feel like Johnson did it justice, showing rape for what it is and what it does to people. Kudos Johnson, thank you for not tucking this topic under the rug for those who'd prefer to blind themselves. Reading is supposed to open the eyes/mind and I hope Johnson succeeds with that task.