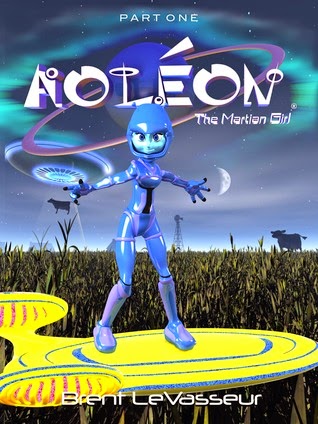 Crop circles magically appear in Farmer Johnson’s field. A mysterious light sweeps over the night sky and awakens Farmer Johnson and Gilbert, the boy next door.

Curious, Gilbert ventures out to discover the source of the light and stumbles into a beautiful Martian girl sitting in a crop circle. Farmer Johnson also investigates the strange light, and thinking that Gilbert and Aoléon are vandals, he chases them. But they sprint to Aoléon’s saucer and escape only to be pursued by the U.S. Air Force.

Gilbert has never been attacked by swarms of giant killer robots. Never met strange aliens from other worlds. Never skyboarded across a megalopolis hidden deep inside an extinct volcano. Never trekked across a vast Martian desert. And never been eaten alive by a gigantic slor (well, almost never, unless you count Billy the fat bully at school).

And luckily, he has never ever confronted an evil ruler of Mars bent on conquering the Earth to steal its cows.

This may be the adventure Gilbert always wished for.

If only he can survive.

Join Gilbert and Aoleon in this exciting middle-grade science fiction and fantasy adventure!

But the story is shorter than you think because (1), this is the beginning of one story broken into several individual parts (the end is abrupt) and (2), there's a lot of illustrations. The illustrations aren't cohesive in style/format but they contain some of that pop-nerddom I mentioned earlier (I'm fairly certain that one illustration was crafted using The Sims characters). And many of the illustrations made me think of children's TV and movies.

I wish the prose had matched the illustrations by being more reminiscent of a screen-play. Losing the passive third person omniscient narration that tells more than it shows would tighten the story-telling into something reminiscent of a Disney-Pixar film.
However, the nerds that this book will appeal to are the ones who will be the most forgiving to the prose. Partly because of all those pop-nerddom references that keep popping up.