Water and Storm Country is the third book in The Country Saga by David Estes. Available at Amazon.

You can see my reviews of The Country Saga here:
Fire Country
Ice Country 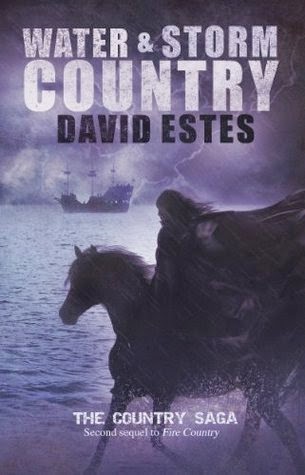 Huck Jones, the son of the admiral of the Soaker fleet, has a legacy to live up to. Haunted by the distorted memories of his mother's untimely death, he must face his demons and the man who raised him as he strives to take the courageous step forward into manhood. When he's transferred to the worst-performing ship in the fleet, everything he believes is called into question when he meets a lowly brown-skinned bilge rat girl. Huck walks a deadly rope...

Meanwhile, Sadie, destined to be a Rider in the Stormer army, seeks to avenge her brother's death at the hands of the Soakers. Trained hard by her mother, an experienced Rider, Sadie knows strength and determination more than most. Her father, a Man of Wisdom, has shown his cowardice more times than she can count. As her world and family fall apart, she must cast aside her anger and focus on the wisdom she's always brushed off as foolishness.

Amidst everything, a Plague ravages all, discriminating against no one.

When four worlds collide, lines will be drawn, sides will be chosen, victory will be sought. Death will be wrought. The mysteries of the Cure for the deadly Plague will be uncovered. Who will survive? And what will those who do learn about themselves and the ones they love?

Water & Storm Country by David Estes
My rating: 4 of 5 stars

Of all the books in both The Dwellers and The Country Sagas, this has been my favorite. There's something about it that reminds me of The First North American series by Kathleen O'Neal Gear and W. Michael Gear, albeit set for a in the future rather than the past and geared for a younger audience.

All the books in The Country Saga introduce new slang; aside from the first book, where I had to adjust to new words/meanings, I haven't struggled with the language. This book features one new slang word - yar for year - which totally makes sense when you think about the setting (a ship) but the word kept throwing me off because it looked like a typo.
Something else that struck me while I was reading this book is all the stuff that goes unsaid between the books, particularly in regards to the love-plots. Estes' leaves a lot of room for the imagination - we see relationships form but the romantic situations that follow are left for readers to dream up between books, which makes the story self-adjusting to each reader depending on age/maturity/experience. I've made a note of this clever ploy in my writing journal so I don't forget it.