The Earth Dwellers (The Dwellers #4 and The Country saga #4)

The Earth Dwellers is the final book in both The Dwellers Saga and The Country Saga by David Estes. Available at Amazon.

You can see my reviews of The Country Saga here:
Fire Country
Ice Country
Water and Storm Country 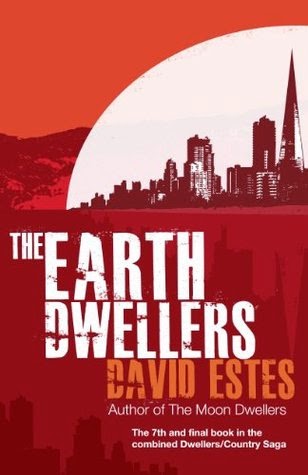 The Earth Dwellers is the 4th book in BOTH The Dwellers Saga and The Country Saga. The author recommends that BOTH series are read in their entirety before reading this book (The Moon Dwellers, The Star Dwellers, The Sun Dwellers, Fire Country, Ice Country, Water & Storm Country).

Your favorite Dwellers and Country Saga characters come together in this epic seventh book!

As President Borg Lecter threatens to annihilate the Country tribes in order to expand his glass-domed empire, Adele ventures into the belly of the beast. Her only hope of survival is the consolidation of Dwellers and Country power before it’s too late.

Former demagogue President Nailin is eliminated, yet civil unrest infects every alliance. To save Adele, President Tristan faces his greatest challenge yet: unifying unfriendly Dwellers in the Tri-Realms to raise an army against Lecter. Meanwhile, Dazz must convince the Ice Country leaders to march with Siena and the Tri-Tribes on the gates of the Glass City.

The world sits on the edge of a knife. Will Adele, Tristan, Dazz, and Siena defeat Lecter and his army of killers before the Glassies wipe them off the face of the Earth?

The Earth Dwellers by David Estes
My rating: 3 of 5 stars

The last book in this series (Water and Storm Country) has been my favorite, so Earth Dwellers was a bit of a let-down after reading it. Two series were tied up neatly and predictably - the predictability in part because I knew that this book was the finale to both series. This last battle could have turned into another three-book war but it didn't so my mind was pre-programmed to draw the fastest, shortest conclusion. This might not affect a younger audience as much as it did adult-me.

I love the realness that makes it into this series. We meet narcissists and misogynists. Characters die just like real people do in real warfare. Drug addiction is shown and depicted as a weak path to choose as a coping mechanism. These are realities that some kids have to face on a daily basis and this series consistently shows characters pulling through and learning to live through tragedy by stepping up and taking control of their lives. I love these harsh real-world elements popping up into the story - that makes it easier for younger readers in similar situations to relate to the characters.

Like any series, there was a moment of sadness to see both sagas reach the end because I did become attached to certain characters (Adele). I look forward to reading Estes' future works - he has some interesting ideas and he grows as a writer between these older sagas and his newer series. It will be interesting to see where he is ten-years from now because I fully expect him to continue developing and expanding his abilities as a writer.