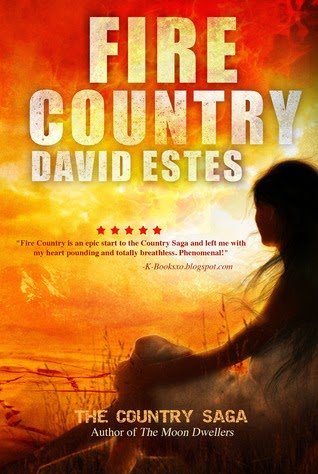 In a changed world where the sky bleeds red, winter is hotter than hell and full of sandstorms, and summer's even hotter with raging fires that roam the desert-like country, the Heaters manage to survive, barely.

Due to toxic air, life expectancies are so low the only way the tribe can survive is by forcing women to procreate when they turn sixteen and every three years thereafter. It is their duty as Bearers.

Fifteen-year-old Siena is a Youngling, soon to be a Bearer, when she starts hearing rumors of another tribe of all women, called the Wild Ones. They are known to kidnap Youngling girls before the Call, the ceremony in which Bearers are given a husband with whom to bear children with.

As the desert sands run out on her life's hourglass, Siena must uncover the truth about the Wild Ones while untangling the web of lies and deceit her father has masterfully spun.

Fire Country by David Estes
My rating: 3 of 5 stars

This is the first book in a new series set in the same world as The Dwellers saga. The Heaters are a group of desert-dwellers that survived the end of the world as we know it. The story takes a long time to build as Estes sets up a new environment, with our main character Siena caught between honoring family tradition and satisfying her personal desires.

The continued existence of The Heaters rests on their ability to breed and their laws provide a throw-back to the days of yore, when women had no rights, especially the right to choose, and were bartered about like trade goods. The book serves as a reminder of why feminism is necessary in both today's world and the fictional world of the Heaters. Could contain panic triggers for victims of domestic violence but, unfortunately, this stuff happens in real life and blind-folding yourself isn't a preventative measure. Sometimes it takes a community to elicit change.

The new slang-terminology introduced threw me for several chapters. For me, it's a format issue, print-copy versus eBook. I have a lifetime of practice with plugging my thumb between the pages of a printed book to mark a spot, like the language key at the front of this book, for easy reference while I continue reading. It's almost second nature; I do it without much thought. I have to stop and think about how to flip between locations in a digital copy, which pulls me out of the story. I adapted to the curse-word substitutions quickly but I never formed a clear picture of new creatures, like the killers, so I had to reference the key multiple times.

I will continue reading this saga because there are questions left unanswered at the end. I'm curious about to the illness that's plaguing the Heaters and their neighboring communities. I also want to see what happens when the folks from The Dwellers meet up with the world above them.