Candy, Blood, and Sex, written by Hydra M. Star and illustrated by Dave Lipscomb, is available at Amazon and Barnes and Noble. 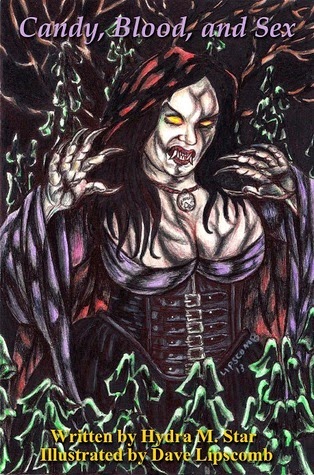 Adult Content Waring: This book contains graphic content and is not meant for readers under the age of eighteen.

When Scarlett Little was a child her parents were killed in a savage animal attack. After their deaths the girl is raised by her grandmother in the city, well away from the North Carolina mountains where her parents met their end, but those mountains still hold a secret danger. A danger that threatens to claim the young woman. Can Scarlett escape its clutches, again? Or will she succumb to the call of the wild and her own dark lusts?

The story “Candy, Blood, and Sex” first appeared in the Ladies and Gentlemen of Horror 2013 anthology. This anthology featured the works of thirteen other talented writers and poets and generates proceed which are donated to The American Cancer Society. The story has since been expanded to include additional passages and is presented here with accompanying illustrations.

Parental Advisory: This story contains strong language and depictions of violence and sex not suitable for minors.

I received a free copy in exchange for a review and I admit a bias - Hydra M. Star is who I turn to when I'm looking for a darker story to read.

The illustrations are graphic but I love how they portray the main character, Scarlett Little, as a voluptuous gal -someone I could pass on the street- instead of the surgically-enhanced stock-character depicted by most erotica. Showing real women is a nice change of pace.

Wild, primitive instinct -not romance- directs the flow of this gruesome tale, which has more in common with the original, uncleaned versions of fairy tales than the typical Paranormal Romance stories undulating the market right now.

I spotted a couple typos but nothing that distracts from the concept. I wish the story was more fleshed out - I want more than a brief glimpse into this dark world. If this [spoiler not given] is what happens when meeting... then, what happens when there's a reason to be ticked off? Inquiring minds want to know and I hope to see more stories filling in the dirty details.