The Eclective: The Celtic Connection

The Celtic Connection by The Eclective is another freebie I snagged on Amazon but it's also available on Smashwords. 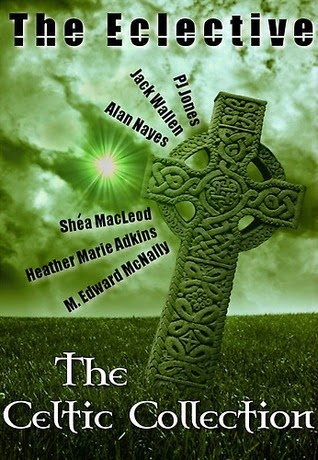 Six stories from The Eclective, six accounts of Celtic things. There's more than one way to go Green.

Irish Kiss by Shéa MacLeod
Morgan Bailey, vampire Hunter, thought finding a Leprechaun's missing pot of gold would be easy. She couldn't have been more wrong.

The Luck of the Irish Brigade by M. Edward McNally
The Irish are fighting themselves, only because there are no other worthy opponents.

Song of the Banshee by Heather Marie Adkins
Belinda has a job to do, but a dying man’s grandson may be a big problem. It’s a hard world for a lonely banshee.

The Red Veil of Vengeance by Jack Wallen
Vlad Kurvail is back and, as usual, he's pissed. This time his cold vengeance is served up to the Irish. Will their luck hold out?

Zombies Eat Leprechauns by P.J. Jones
When a zombie curse infects the Fairytale Kingdom, Lucky the Leprechaun needs the help of an idiot dragon slayer and a cross-dressing dragon to escape. Can he make it out with his pot of gold, or will Lucky's luck run out?

Five Shamrocks by Alan Nayes
After her husband dies on St. Patrick's Day, life goes on for Mattie O'Malley.

This is the second collection I've read by The Eclective - the first was more horror-centric where this collection is romanticized (I prefer horror). I averaged my ratings for each story for the collection's rating: 3-stars.

I read this on the eve of my father's open-heart surgery so I might be emotionally biased toward the very last tale in the collection - Five Shamrocks, by Alan Nayes - which made me teary. It's my favorite story in the collection.

There are a couple editing errors scattered through the collection. One story - The Red Veil of Vengeance by Jack Wallen - failed to hook me because of a chronology-slash-incorrect word usage: the year given is 406AD and the main character (Kurvail) is a "descendant" of Vlad Tsepes, who was born 1431 so descendant was the wrong word choice (ancestor or predecessor would fit better). The chronology-incorrect use of a word kept me from getting sucked into the story - which sucks because this story cleverly plays off a legendary figure and I wish that one detail hadn't nagged me through the tale.

I've downloaded a couple more free collections by The Eclective to peruse so obviously I feel that this group warrants reading.