Dark Discoveries Issue #28, published by JournalStone, is available at Amazon, Barnes and Noble, and BooksAMillion. 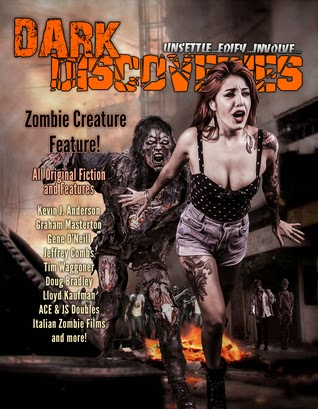 “Gutmunchers! The Italian Zombie Films” by James R. Beach, “JournalStone Publishing’s DoubleDown Series: The Revival of the Ace Doubles”, "Get on the Midnight Meat Train: A Special Anniversary Edition" by Trever Nordgren

Dark Discoveries - Issue #28 by Jonathan Maberry
My rating: 4 of 5 stars

Ever think about what it might have been like back in the days when Sherlock Holmes was being published as a serial in a multitude of literary magazines? My generation of readers hasn't been able to enjoy that luxury and this magazine felt like it's trying to live up to the expectations I imagined when I first read the collected works of Holmes in my youth, with one exception - Dark Discoveries is devoted to the horror cannon instead of mysteries.

The fictional stories were my favorites so, of course, there are more nonfiction articles than stories, but the articles and interviews were interesting and informative.

I received a free copy of this magazine in exchange for a review - I'm always wary of magazines because many are filled with more adverts for crap I don't want or need than articles. There are ads in this magazine but not for the usual crap (personal hygiene products and what-not). Every ad in this issues is geared for the horror aficionado and many introduced me to book titles that I hadn't seen or heard about before and am now interested in tracking down.