Christopher's Diary: Secrets of Foxworth (Dollanganger, #5) by the V.C. Andrews estate is available at Amazon, Barnes and Noble, and BooksAMillion. 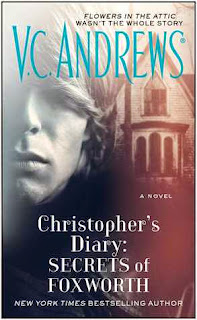 Jealousy, tragedy, survival, and revenge—the discovery of Christopher’s diary in the ruins of Foxworth Hall brings new secrets of the Dollanganger family to light and obsesses a new generation. With Flowers in the Attic and Petals on the Wind both now major Lifetime TV events, this first new addition to the Dollanganger story in nearly thirty years is a timely look at the events in the attic—from teenage Christopher’s point of view.

And don’t forget to preorder the follow-up, Christopher’s Diary: Echoes of Dollanganger!

Christopher Dollanganger was fourteen when he and his younger siblings—Cathy and the twins, Cory and Carrie—were locked away in the attic of Foxworth Hall, prisoners of their mother’s greedy inheritance scheme. For three long years he kept hope alive for the sake of the others. But the shocking truth about how their ordeal affected him was always kept hidden—until now.

Seventeen-year-old Kristin Masterwood is thrilled when her father’s construction company is hired to inspect the Foxworth property for a prospective buyer. The once grand Southern mansion still sparks legends and half-truths about the four innocent Dollanganger children, even all these decades later. Foxworth holds a special fascination for Kristin, who was too young when her mother died to learn much about her distant blood tie to the notorious family.

Accompanying her dad to the “forbidden territory,” they find a leather-bound book, its yellowed pages filled with the neat script of Christopher Dollanganger himself. Her father grows increasingly uneasy about her reading it, but as she devours the teen’s story page by page, his shattering account of temptation, heartache, courage, and betrayal overtakes Kristin’s every thought. And soon her obsession with the doomed boy crosses a dangerous line…

Christopher's Diary: Secrets of Foxworth by V.C. Andrews
My rating: 1 of 5 stars

I received a free copy of this book from GoodReads First Reads in exchange for a review. Thanks for choosing me but... this feels like I'm writing a breakup note.

I read the original Dollanganger series because my friends read it; I wasn't a fangirl but I didn't hate the series either. The original series excited me because I was able to share it with others and I was pleasantly surprised to see a return of the series.

Unfortunately, this book disappointed me with its promises of a new perspective. I've seen interviews stating that this book is more than a rehash of the original books. I call bull-turds. The journal written by Christopher does nothing more than quickly recap the original series.

This is the first book in a new series and the focus is to set up the new characters/world while forgetting to provide a plot. I felt like this book ended without beginning - it's like reading the first quarter of a book, then having to wait a year to read the second quarter. If we want to know where all this set-up is going, we have to buy the next book. And the next. This book lacks the depth and darkness of the original series, because of that lack of plot. Absolutely nothing happens except the introduction of characters and the modern day world around the Foxworth property.

Kristin Masterwood is the modern day descendant of the Foxworth/Dollanganger clan and she is the most boring girl in the world. She doesn't feel real. She's too goody-two-shoes for my tastes. I don't buy her now and I wouldn't have bought her when I was a teen.

And then, this is what happens: girl meets book, girl becomes obsessed with book, so girl finds ways to prevent herself from reading the book?

This is a situation I'm all too familiar with so I know what happens in real life: girl meets book, girl becomes obsessed with book, girl locks herself in her bedroom and only the forces of Mother Nature Herself can pull girl out of the book until the final page is turned. Brief mourning period ensues.

But that's not Kristin. Maybe it's a bookworm thing and she's not a bookworm. Instead, she spends her time ditching her friends to hook up with a boy. I can read the next book to see how all this works out but since I have a pretty good idea... I'll probably be reading something else.