Found a nifty new series of books to investigate: Akashic Noir. I've added USA Noir to my to-read list but I'd give all the books about American cities a go.

LibraryThing made it possible for me to read this book in the series:

Available at Amazon, Barnes and Noble, and BooksAMillion. 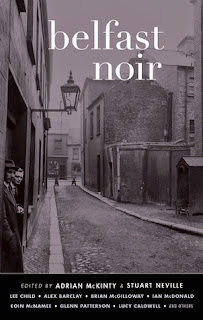 "All the stories are compelling and well executed...Great writing for fans of noir and short stories, with some tales close to perfection." -- Library Journal, Starred review

"[Belfast Noir] zooms in on Northern Ireland's capital city, whose history surely more than qualifies it as a breeding ground for noir." -- Booklist

"The choices made by editors McKinty and Neville celebrate lowlifes, convicts, hookers, private eyes, cops and reporters, and, above all, the gray city at the heart of each story." -- Kirkus Reviews "Belfast, with its bleak, murderous history, at last gets an entry in Akashic's acclaimed noir series." -- Publishers Weekly

"Belfast Noir is one of the strongest entries in Akashic's admirable City Noir series....all [stories] are of exceptional quality. Anyone with a fondness for noir, an interest in the past, in contemporary Irish writing, or simply an appreciation of excellent prose should snap this one up." -- Reviewing the Evidence

"A terrific collection." -- Escape Into Life

Launched with the summer '04 award-winning best seller Brooklyn Noir, Akashic Books continues its groundbreaking series of original noir anthologies. Each book is comprised of all-new stories, each one set in a distinct neighborhood or location within the city of the book.
Reflecting a city still divided, Belfast Noir serves as a record of a city transitioning to normalcy, or perhaps as a warning that underneath the fragile peace darker forces still lurk.

From the introduction by Adrian McKinty & Stuart Neville:

"Few European cities have had as disturbed and violent a history as Belfast over the last half-century. For much of that time the Troubles (1968–1998) dominated life in Ireland's second-biggest population centre, and during the darkest days of the conflict--in the 1970s and 1980s--riots, bombings, and indiscriminate shootings were tragically commonplace. The British army patrolled the streets in armoured vehicles and civilians were searched for guns and explosives before they were allowed entry into the shopping district of the city centre...Belfast is still a city divided... You can see Belfast's bloodstains up close and personal. This is the city that gave the world its worst ever maritime disaster, and turned it into a tourist attraction; similarly, we are perversely proud of our thousands of murders, our wounds constantly on display. You want noir? How about a painting the size of a house, a portrait of a man known to have murdered at least a dozen human beings in cold blood? Or a similar house-sized gable painting of a zombie marching across a postapocalyptic wasteland with an AK-47 over the legend UVF: Prepared for Peace--Ready for War. As Lee Child has said, Belfast is still 'the most noir place on earth.'"

Belfast Noir by Adrian McKinty
My rating: 4 of 5 stars

I received a free copy of this book from LibraryThing in exchange for a review and, as an American, I'm now interested in reading Akashic Noir's collection of USA Noir because of my familiarity with the locations.

The stories in this anthology have more in common with film noir than the hardboiled detective stories that everyone expects when they see the word noir. Don't get me wrong, there are a couple detective stories here but it's nice to see a wide range of noir work. I didn't know what "dirt" to expect in the next gritty story.

Like most anthologies, there were stories I enjoyed and stories that didn't hook me, but I liked a majority of stories and added a couple new (to me) authors to my to-read list.