Big Hairy Deal is the second Creep Squad book by Steve Vernon and is available at Amazon.

You can see my review of the first Creep Squad book here: Bigfoot Tracks: A Creep Squad Collection. 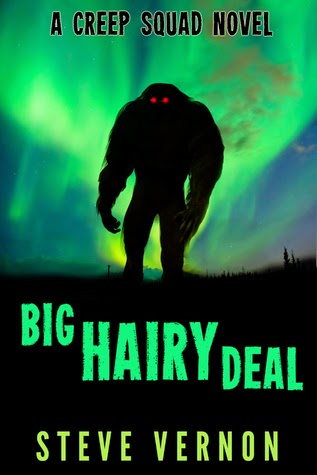 What happens when Bigfoot, the Trickster Coyote, the ghost of Sam Steele and the long-lost spirit of The Prophet, brother to the mighty Tecumseh and reincarnated in the form of a giant pink flying Winnebago go toe-to-toe with dark supernatural forces in a cross-Canada battle ranging from Cape Breton to Labrador to Thunder Bay?

I'm not saying that it's going to be pretty...

Remember - all October long in honor of Halloween BIG HAIRY DEAL will be available for a measly 99cents. Early in November I'll be moving the price up - so grab it while it's cheap!

WHAT PEOPLE ARE SAYING ABOUT STEVE VERNON

"If Harlan Ellison, Richard Matheson and Robert Bloch had a three-way sex romp in a hot tub, and then a team of scientists came in and filtered out the water and mixed the leftover DNA into a test tube, the resulting genetic experiment would most likely grow up into Steve Vernon." - Bookgasm

"Steve Vernon is something of an anomaly in the world of horror literature. He's one of the freshest new voices in the genre although his career has spanned twenty years. Writing with a rare swagger and confidence, Steve Vernon can lead his readers through an entire gamut of emotions from outright fear and repulsion to pity and laughter." - Cemetery Dance

"Armed with a bizarre sense of humor, a huge amount of originality, a flair for taking risks and a strong grasp of characterization - Steve's got the chops for sure." - Dark Discoveries

"Steve Vernon was born to write. He's the real deal and we're lucky to have him." - Richard Chizmar

Big Hairy Deal by Steve Vernon
My rating: 4 of 5 stars

Gonna veer off track -
Years and years ago when I was still in my single digits and out learnin' the various herbs that grow here in southern West Virginia, I was shown a common ditch-weed and cow-pasture flower called chicory. And I was told that if you roasted and boiled the roots you'd be left with a drink that you could almost pretend was coffee, if you squinted hard enough when you chugged it down. That's what folks did back in them American Civil War days when the war interrupted the coffee and tea trade, or so I was told by an uncle.

I kept thinking about that memory as I read this book, not because Vernon talks about herbs and their various uses but because of the way he tells this story. And if you dig the way I told my memory, well, you'll probably dig this book. There's a couple typos, but nothing too serious. And, for me, hailing from what is southern Appalachia to Vernon's northern Appalachia, it's interesting to see the similarities in the styles of storytelling despite the border dividing 'our' mountains into different countries.

This is the second Creep Squad book that I've read and I said in my review of Bigfoot Tracks: "There's not a romantic liaison to be seen but, to be perfectly honest, I'd probably enjoy Vernon's take on a romantic supernatural liaison. It would go one of two ways and either be effin' hilarious or deeply disturbing."

Well, Vernon did it, he gave me the romance that I mentioned in the review of the first book. And it's beautiful because it's very realistic and not what I expected at all so I was wrong about the hilarious/disturbing part and have to take back my words. Vernon always surprises me with his storytelling abilities.

I highly recommended this story for moms who have boys who are step-sons (this might be your love story being told here). Girls, especially tomboys, are more than capable of relating to this story too but, since the main character -Adam- is male, this story has a stronger appeal to young men (and probably their moms).

I look forward to Vernon's work so much that I pre-ordered a copy of this book and wasn't disappointed.