I read the first two installments of the Magician Trilogy by Lev Grossman on my own time/dime - I reviewed the books on GoodReads, mostly so I could remember what the books were about at a later date. I didn't share the reviews here on my blog (I was just getting into the hang of blogging reviews).

These links will take you to my reviews on GoodReads:

I wanted to love this series but I hated the characters. I gave the first book a two-star rating; the second book received a one-star because the rape scene pissed me off. When I finished the second book, I swore I wouldn't read the third. Then, the giveaway on GoodReads popped up and my OCD about leaving trilogies/series unfinished kicked in and whoever decides the winners of the giveaways knew they could turn that OCD against me (you asshole, but not really. Thanks for playing me because I collect uncorrected proof-copies...if you wanted to send me the first two books in uncorrected proofs to round out my collection, I might be convinced to worship you on my blog - only on my blog because I don't have time in real life).

The Magician's Land (Magician Trilogy #3) by Lev Grossman is available at Amazon, Barnes and Noble, and BooksAMillion. 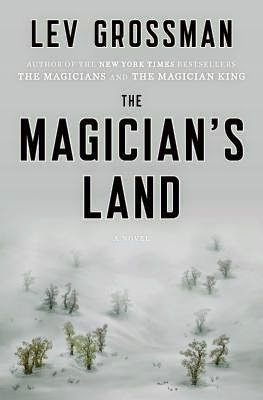 Quentin Coldwater has lost everything. He has been cast out of Fillory, the secret magical land of his childhood dreams that he once ruled. Everything he had fought so hard for, not to mention his closest friends, is sealed away in a land Quentin may never again visit. With nothing left to lose he returns to where his story began, the Brakebills Preparatory College of Magic. But he can’t hide from his past, and it’s not long before it comes looking for him. Meanwhile, the magical barriers that keep Fillory safe are failing, and barbarians from the north have invaded. Eliot and Janet, the rulers of Fillory, embark on a final quest to save their beloved world, only to discover a situation far more complex—and far more dire—than anyone had envisioned.

Along with Plum, a brilliant young magician with a dark secret of her own, Quentin sets out on a crooked path through a magical demimonde of gray magic and desperate characters. His new life takes him back to old haunts, like Antarctica and the Neitherlands, and old friends he thought were lost forever. He uncovers buried secrets and hidden evils and ultimately the key to a sorcerous masterwork, a spell that could create a magical utopia. But all roads lead back to Fillory, where Quentin must face his fears and put things right or die trying.

The Magician’s Land is an intricate and fantastical thriller, and an epic of love and redemption that brings the Magicians trilogy to a magnificent conclusion, confirming it as one of the great achievements in modern fantasy. It’s the story of a boy becoming a man, an apprentice becoming a master, and a broken land finally becoming whole.

The Magician's Land by Lev Grossman
My rating: 3 of 5 stars

I wasn't going to read this book because the second book...well, I had to make myself finish it. That was a couple years ago and time has since blurred the memories. Then, I saw the third book in the GoodReads First Reads giveaway and I thought, what the heck, and entered the contest, not expecting to win because of my reviews of the first two books. And guess who won a copy? Yup. Me.

This was the easiest of the three books for me to read. Fillory is established, as are the characters, who still annoyed me with their snobbishness. Janet turns into a real b'dass that I wish I could've liked but couldn't; she left a bad taste in my mouth because I remember how much I despised her in the first two books (and, oh, how I wish I didn't remember that man's version of a rape for Julia, which drew little attention here in this book).

Maybe Janet was intended to bring an Eowyn-from-LoTR's moment (I hated Eowyn too, until she killed the Lord of the Nazgûl) but something prevented that feeling of hells-yeah-you-get-on-with-your-bad-self-grrrl from happening for me with Janet.

I think this book was easier on me because the real world and Brakebills fell into the background, taking its pretentious sardonicism with it, to be replaced by a cynicism that pertains to Fillory. At least it felt real, unique to this author, and it brought all of the sharp jabs at other fantasies full circle - here, Grossman's world is drawing to a close and this book felt like a last-minute hero's effort to save it. That made the book easier to read (but I still hate the characters).

Posted by Angie Lisle at 11:00 AM Labels: Reviews