A Beastly Scandal by Shereen Vedam is available at Amazon, BooksAMillion, and Barnes and Noble.

New Regency Romance/Fairytale
Inspired by Beauty and the Beast 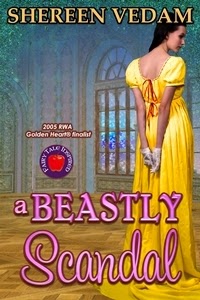 A BELLE OF THE BALL…
Lady Annabelle Marchant was a belle of the ball in London until she used her psychical senses to save a man’s life. She failed miserably, leaving him dead and her disgraced. All she wants now is a chance to comfort his widow by cleansing the woman’s home of her husband’s restless spirit. But the widow’s son, the beastly Lord of the Manor, accuses her of coming to the wilds of Cheshire to snag him as a husband. Thoroughly disgusted, she is bent on proving him wrong.

…BECOMES PERSONA NON-GRATA…
Lord Rufus Marlesbury, the Earl of Terrance, is suspected of murdering his father. He has come home to clear his name by finding the real killer before the new year or Rufus will be called in front of the House of Lords to answer for the crime. He does not have time to waste fending off a marriage-minded miss who has inveigled an invitation to his home by playing on his grief-stricken mother’s worst fears.

…WHEN A MURDERER IS ON THE RAMPAGE
With an unruly manor ghost terrorizing the occupants and corpses piling up in the village, Belle must find a way to see the man beneath the beast and Rufus must learn to believe in the love of a woman who has no reason to trust him. Only by working together can they stop a vengeful ghost before it torments the guests or before the killer strikes again.

A Beastly Scandal by Shereen Vedam
My rating: 3 of 5 stars

A rainy day Regency-romance. I'm admitting out-right, this isn't a genre I normally read because I'm not a fan of straight-up romance but I won a free copy of this book, in exchange for a review, during a book-club giveaway so I read it.

In the first couple chapters of the book, I expected sex galore, à la Harlequin-Romance style, but the book surprised me because sex is implied and left to the imagination - which I appreciate because I didn't have to skim pages.

Some of the descriptions in this story remind me of Wilkie Collins (The Haunted Hotel is foremost in my mind), with a dash-more romance flavored by Disney whimsy. With the way sex is handled, this story is appropriate for a younger audience, perhaps girls too old for Disney princesses but too young to be hard and cynical (like me).

The story does utilize a mystery but I solved it quickly because...well, I can't tell you. But, it was an obvious clue that someone who knows how to read the format of a mystery book will spot immediately. Someone less acquainted with detective/mystery/horror novels -like a younger audience- might not catch the clue so easily.

I don't read this genre very often because most of the romance doesn't feel real to me. That holds true for this story but, keep in mind, I'm biased as h-e-double hockey sticks. If you want a nice rainy afternoon regency-romance to cuddle up with in a chair by the window, disregard my bias. This book fulfills that purpose.