I bought Hills of Fire: Bare Knuckle Yarns of Appalachia, edited by Frank Larnerd, at a book signing some time ago (but not one featuring Larnerd so now that's on my to-do list) as evidenced by this post. I finally found time to work the book into my reading schedule. I'm labeling this post West Virginia because of the publisher, Woodland Press, but the stories found here hail from all over Appalachia.

Available at Woodland Press, Amazon, Barnes and Noble, and BooksAMillion. 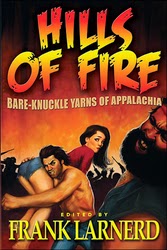 The rugged mountains of Appalachia have always been a place where a man, if he was tough enough, could carve out a place for himself. The land is bountiful and composed of vast forests, racing rivers, and dizzying peaks. The region is also known for its courageous victors, monstrous villains, and tales of incredible adventure.

When a dozen of today's hottest authors get together for an Appalachian tribute to the great pulp writers of the past, they deliver up a volatile mix of unpredictable adventure. Square-jawed heroes, desperate outlaws, dangerous women, hellfire roadsters, and aliens from another world are ready to set the hills on fire! Contributors include: Thomas Pluck, Jesse Knifley, Jessie Grayson, Steve Rasnic Tem, Josh Reynolds, Amber Keller, Jason Stuart, Steve Vernon, Paula Stiles, Patrick MacAdoo, Michael Knost, and Jamie Lackey.

Hills of Fire: Bare-Knuckle Yarns of Appalachia by Frank Larnerd
My rating: 4 of 5 stars

I expected to find more humor in this book because of the cover art but was surprised to find a much wider range of emotions covered in this collection of short stories. I should've guessed that from the title. There's a strong soldier theme in many of the stories which makes this a good gift for bookworm-soldiers hailing from Appalachia.

Like many short story collections, there were a couple tales here that didn't hook me but it was a matter of personal taste/understanding so I'm not pointing out the stories.

Four stories stood out to me the most. Jesse Knifely's Elzy Taylor and the Men from the City and Michael Knost's Knuckles in Coal Dust are great portrayals of the mind-set that Appalachian folk are known for while also shying away from the typical stereotypes, depicting characters and settings that felt real. I'm biased when it comes to Steve Vernon, his work always reminds me of people I know in real life and Dead Man's Salute is a story I can recommend to a couple soldiers I know. Paula R. Stile's The Back Roads to Hell hooked me so much that I'd like to see a series come from this character.

I devoured these stories, reading one each night before bed to prevent myself from reading the book in one sitting. I wish this book was longer, that's my biggest beef - I felt like I was just settling into the book when I turned the last page.